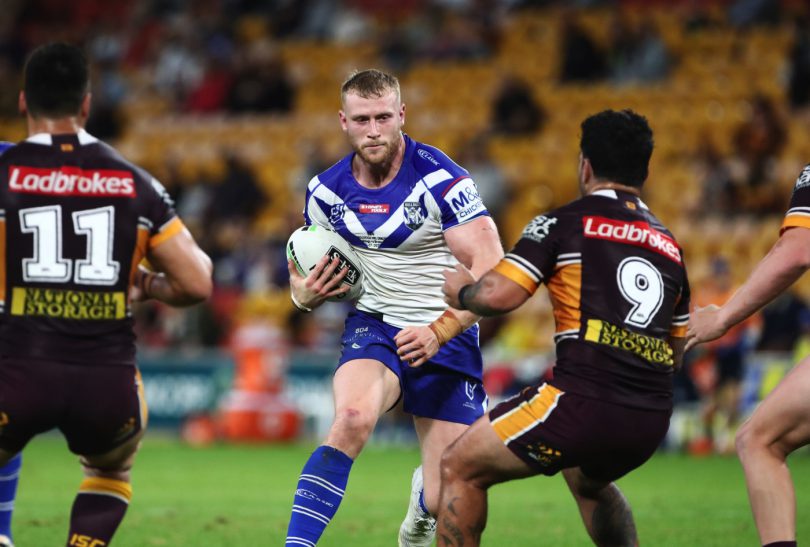 WITH both teams still way off their best, Canterbury Bankstown Bulldogs went down to the Broncos 26-8 on Saturday night, despite the anticipation ahead of the NRL debut of Bulldogs prop Luke Thompson, who had played 158 Super League games for St Helens and seven Tests for England and Great Britain.

Thompson made his presence felt early through a walloping tackle which wasn’t enough to stop the Broncos scoring a second time after a dropped ball by Aiden Tolman, giving them a 10-nil lead after 15 minutes.
Kieran Foran made them pay with a cut-out pass to a flying Nick Meaney who finished superbly in the corner.
As half-time neared, Thompson and a Bronco wrangled, with the Englishman put on report for a shoulder charge on the Tongan international.
Broncos took the advantage in the second half and soon had a 16-4 lead.
Foran was then the provider for Watene-Zelezniak to score but a Bronco had the final say, taking four Bulldogs with him towards the sideline and with an inch to spare popped it back inside to claim a second four-pointer.
Coach Dean Pay inherited a diabolical salary cap situation but the Bulldogs’ lacklustre results are deemed simply not good enough though he remains hopeful.
“The boys dug in and fought really hard and we looked ok but we all need to be more organised in attack,” he said.
“I thought Thompson was terrific and once he gets a few more games under his belt, will be a real shining light.
“We will move forward and we will get better.”
The Bulldogs next play the Dragons at WIN Stadium in Wollongong at 3pm on Saturday.