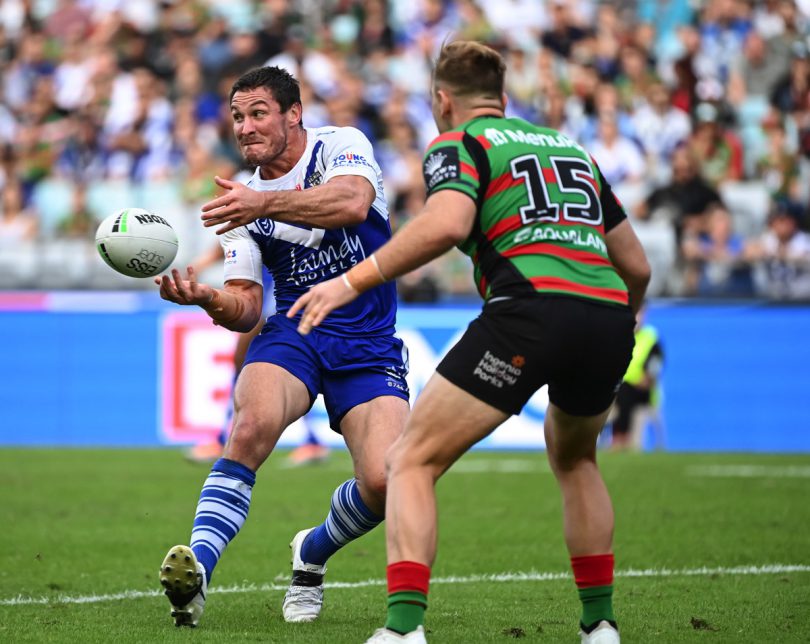 THEY opened the scoring and never let up but the Canterbury Bankstown Bulldogs could not match the might of the more experienced Rabbitohs who snared the 36-16 victory at Accor Stadium on Good Friday.

In the early stages it was the Bulldogs doing all the attacking and they went across the line in the 15th minute when halfback Kyle Flanagan delivered a perfectly timed pass over the top for Brent Naden to cross in the right hand corner.
Six minutes later the Bulldogs threatened to extend their lead but Braidon Burns was held up over the line.
They went a man down in the 27th minute when Jeremy Marshall-King was sin binned and it took the Rabbitohs just three minutes to capitalise and then again three minutes later, taking a 12-6 lead.
They made it a double in the second half and then again after catching the Bulldogs defence napping.
But Canterbury were rewarded with a try to Josh Addo-Carr, who has now scored 14 tries in 11 games against the Rabbitohs.
Then the Bunnies put the icing on the cake with a try as the score blew out to 36-10 before Jeremy Marshall-King grabbed a late try for the Bulldogs.
Bulldogs coach Trent Barrett said the sin binning of Marshall-King was tough.
“You’ll never play a perfect game of footy; it was pleasing in the first 20 minutes, we stuck it to some good sides for periods but not long enough,” he said.
“Couple of tries there just shouldn’t have gone in … If you stop them, you’re still in the hunt.”
The Bulldogs travel to Suncorp Stadium to face Brisbane for the second time this Friday, April 22, at 7.55pm, having gone down 16-10 at Accor Stadium in round two.