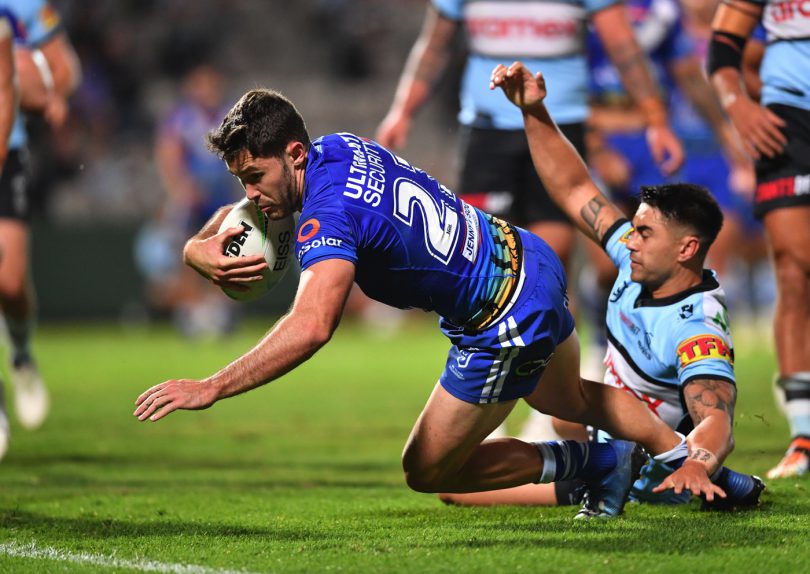 AN emotional Canterbury Bankstown Bulldogs coach Trent Barrett celebrated his first victory in charge of the club as they survived a late fightback and created history by becoming the first club to use the NRL’s new 18th man rule in Saturday night’s 18-12 defeat of Cronulla Sharks.

Barrett went as far to label it the greatest win he’s been involved in as a coach and quite possibly as a player.
He was in tears at full-time as he embraced Canterbury players on the sideline and praised their courage and resolve to repeatedly repel the Sharks despite losing forwards Chris Smith and Matt Doorey in the first half and hooker Brad Deitz late in the match.
With the Sharks forward sin-binned for a shoulder charge that had forced Doorey from the field in the 26th minute, Barrett was able to call halfback Brandon Wakeham onto his bench because Canterbury had lost a player due to foul play.
“That’s the best win I have been involved in in my coaching career, and even as a player,” Barrett said.
“It meant a hell of a lot to all of us.
“No one really knows what goes on in the four walls of a football club, and the emotion in getting prepared every week.
“I am just really proud of them, they showed a lot of resolve, determination, grit and care for the club, which is really important.
“They turn up every week, they never whinge, the work hard, they cop feedback and they deserve that result tonight.
“It is definitely something we can build our season on.”
The Bulldogs next take on the Parramatta Eels from 5.30pm on Saturday at Stadium Australia Sydney.