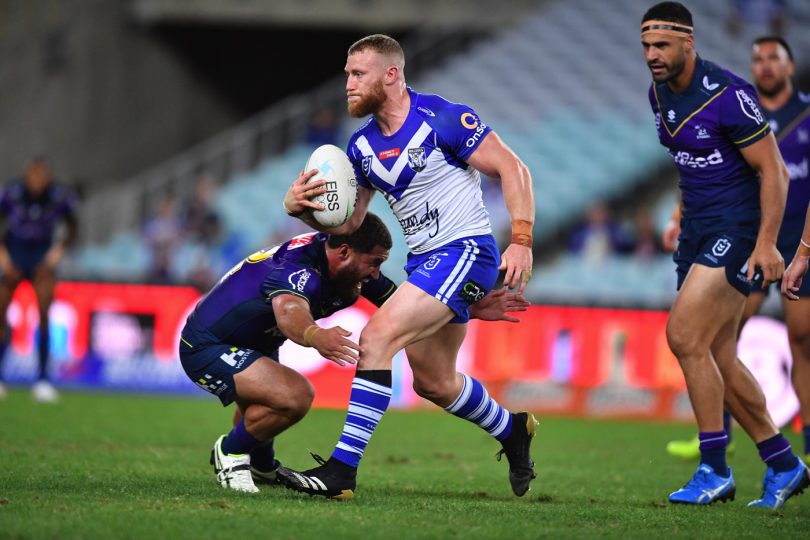 THE Canterbury Bankstown Bulldogs endured their fifth loss of the year on Saturday, marking their worst start to a season since 1964.

Trent Barrett’s men showed signs of improvement but slumped to a 52-18 loss against Melbourne Storm.
Dogs fans had at least one reason to cheer in the first half, though, in his first game of the season, bench forward Luke Thompson crashed over the chalk to score the Bulldogs’ first points in 265 minutes of football.
The Dogs hadn’t scored a single point since round one, having been held scoreless by the Panthers, Broncos and Rabbitohs in the weeks since.
Despite breaking their drought, the Bulldogs were still outscored five tries to one in the first half.
They began to find their feet in the second half, striking back through a try to Jake Averillo.
An uncharacteristic error from Storm gave the Bulldogs another opportunity to attack, and when Dallin Watene-Zeleniak managed to hold onto an Averillo kick, the Canterbury faithful dared to dream.
However their hopes were dashed when Melbourne scored again in the 68th minute. Two further tries added insult to injury.
Barrett said he wasn’t happy with individual efforts defensively.
“I thought after half time, we showed some real resolve,” he said.
“In patches, our attack has certainly improved.
“But our inability to build pressure is hurting us. To beat good teams, you have to have a full performance across the board. We have a lot of things to fix and just have to keep working hard.”
Canterbury will now be hoping for a win over the North Queensland Cowboys, on Sunday from 4.05pm at Queensland Country Bank Stadium, Townsville.