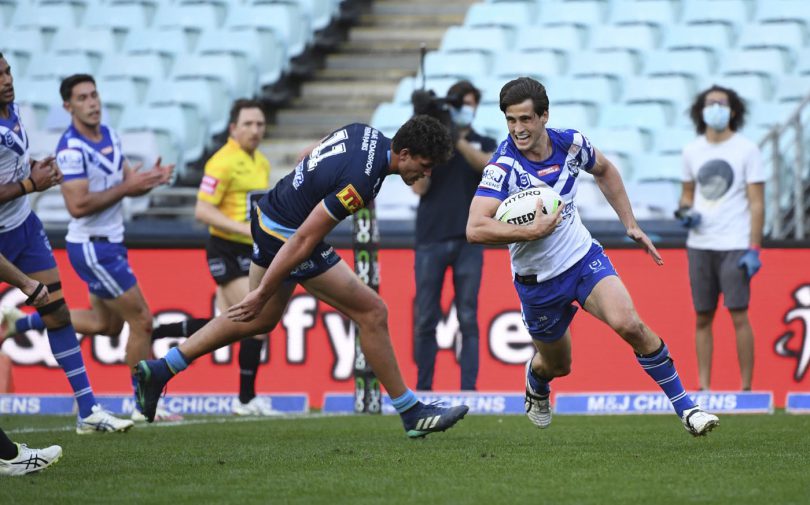 THE wooden spoon is edging closer to the Canterbury Bankstown Bulldogs after their 18-14 loss to the Titans on Saturday, with the biggest talking point out of the clash the season-ending injury to off-contract star Kieran Foran, who is desperately chasing a deal for 2021 and beyond.

After virtually single-handedly inspiring a Bulldogs fightback, Foran was forced from the field midway through the second half with a suspected pectoral tear in his right bicep and left the stadium quickly after the match ended.
“It is disappointing,” Canterbury interim coach Steve Georgallis said.
“I am sure he will get over this, he is a resilient type of player so I am sure he will come back.”
However, it won’t be with the Bulldogs after the club decided against offering Foran a new contract for next season and announced the signing of Blake Green on a one-year deal.
English prop Luke Thompson thought he had scored his first NRL try just before half-time but the Bunker ruled he had promoted the ball after being tackled short of the line and Canterbury went to the break trailing 14-6.
Halfback Lachlan Lewis stepped up in Foran’s absence to score in the 72nd minute, but rookie centre Jake Averillo missed the conversion and the Titans had their first back to back wins.
“Gold Coast scored two tries from kicks and one from a scrum, and that was the difference,” Georgallis said.
“If you are not competing every single minute and on every single play you get burnt and we got burnt three times today and it has cost us the game.”
The Bulldogs next take on Manly on Friday from 6pm at ANZ Stadium.