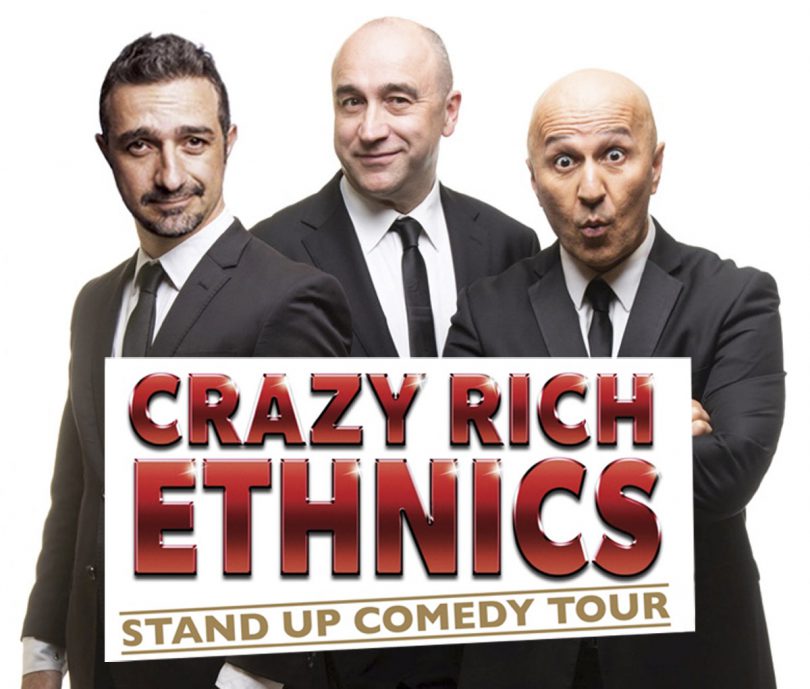 HERE come the ‘Crazy Rich Ethnics’ who are bringing their hilarious, new, stand-up comedy show to Bankstown Sports this month.

Jam-packed, the show will include the original ‘wog’ himself George Kapiniaris, who co-created the Ethnic shows and concepts and was the star of ‘Acropolis Now’.
George also has a huge body of work including feature films, sit-coms, musical theatre and is an award-winning actor and stand-up comedian.
He will be joined by performer on the rise, James Liotta.
With over 20 years’ experience, James has been involved in some of the biggest and most successful productions Australia has seen including ‘Thank God You’re Here’, ‘Utopia’, ‘Underbelly Squizzy’ and ‘Fat Pizza’.
With his characters being very relatable, regardless of your background, James is a stunning performer with incredible energy and a stand-up comedian who will make you laugh until you cry.
Tahir makes up the third member of this killer show and has incredible credits including feature films, sit-coms such as ‘Fat Pizza’ and ‘Housos’, co-creator of ‘Here Come The Habibs’ and has appeared on countless shows and was most recently seen on ‘I’m a Celebrity Get Me Out Of Here’.
A dynamic performer, Tahir is a Logie-winning actor and award-winning comedian guaranteeing a memorable night out of fun for friends and family.
See ‘Crazy Rich Ethnics’ in The Theatre at the club on Friday, May 21, with doors open 7.15pm.
Tickets: $49.90 or $219.60 for a booth; go to tickets.bankstownsports.com.