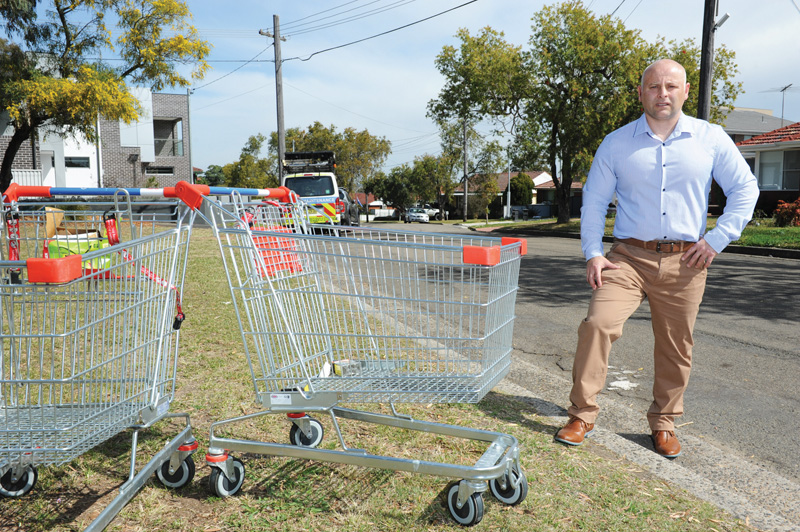 THE Premier is being called on to make change to rid our streets of abandoned trolleys.

An eyesore and potential hazard, many shopping trolleys are ending up in public places, parks and creeks and have a persistent and problematic issue for councils.
Abandoned shopping trolleys are an eyesore as well as a potential hazard for cars and pedestrians, says Canterbury Bankstown Councillor Steve Tuntevski.
Last month he called on the council to write to the Premier and relevant ministers to introduce “specific standards, legislation and greater enforcement powers” to more effectively manage the issue.
He also urged the council to “facilitate the installation of trolley management systems,” such as coin-operated trolleys or wheel lock mechanisms and to promote how the public can report abandoned shopping trolleys.
“Although shopping trolleys make up a small proportion of illegally dumped items, they present a persistent and problematic issue for the council,” he said.
“Shopping trolleys are large, bulky and heavy, making them difficult to collect, store and dispose of.
“While it is acknowledged that some large retailers do employ strategies where they pick up trolleys around their store, it’s not totally effective, as they still end up in public places, parks and creeks several kilometres away.
“Shopping trolleys are owned by and are the responsibility of retailers who provide trolleys for their customers, therefore retailers need to take more responsibility.”