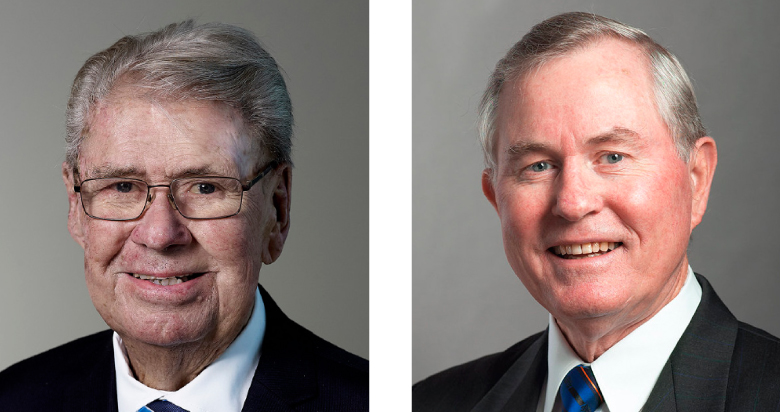 TWO Bankstown identities are being remembered for their tireless efforts after passing away unexpectedly – former Bankstown MP (1987-99) Doug Shedden, 82, and Bankstown Sports Board member Alex Fulcher, 84.

Doug passed away on Monday after a fall and five years after beloved wife Patricia, with whom he had a daughter, Leanne.
He sat on Bankstown City Council, 1977-1987, and was deputy mayor, 1980–83. A member of the Labor Party, he was president of the Greenacre branch for 20 years.
Bankstown MP Tania Mihailuk said: “I’m deeply saddened to learn of the passing of Doug, an ‘old school’ politician who believed in grassroots politics.”
“One of his greatest achievements was the rebuilding in 1988 of the Bankstown Lidcombe Hospital.
“In retirement, he served as a Director at Bankstown Sports, Bankstown City Aged Care and patron to many local organisations.”
Mayor Khal Asfour said: “I was saddened to hear of the passing of Doug and my thoughts are with his family.
“I know his memory will live on particularly in Greenacre, where we have the Doug Shedden Room in the Greenacre Citizens’ Centre.”
Doug’s funeral will be held on Tuesday, January 21, from 11am at St Brendan’s Catholic Church, 54 Northam Avenue, Bankstown, with a wake to follow at Bankstown Sports.
Sporting club stalwart Alex Fulcher passed away following after a short illness on Saturday.
His commitment to track and road cycling as an elite athlete, coach, manager and volunteer earned him an MBE in 1982 and OAM in 2013.
At 21, Alex married Janet and had three sons and a daughter.
He established his own car and caravan dealerships and one of Sydney’s largest bicycle shops in Chipping Norton.
Alex was a manager and coach for Australian cycling teams, NSW Cycling Federation President for 16 years and a member of the cycling committee that helped prepare for the Sydney 2000 Olympics at the Dunc Grey Velodrome.
Sports Club Chairman John Murray said: “Alex was well respected for his dedicated contribution to the club, the community, and both elite and grassroots sport. He will be sorely missed and fondly remembered by all.”
Alex’s funeral will be held this Thursday, January 16, from 2pm at Woronora Crematorium followed by a wake at Bankstown Sports.