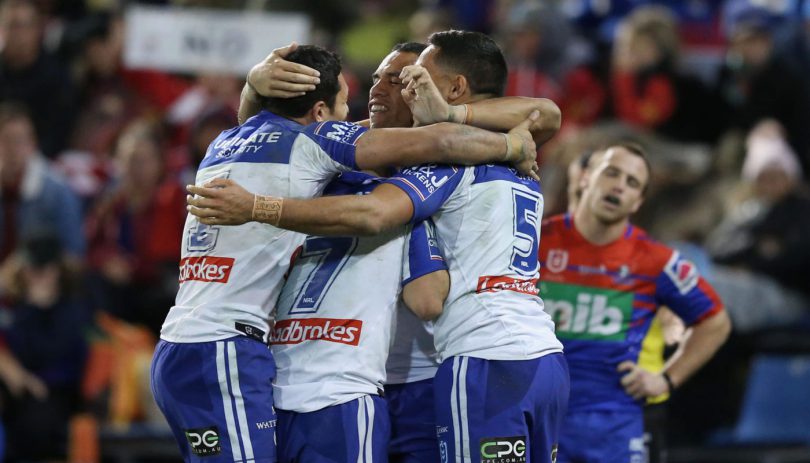 THEY achieved a hard-earned, 12-10 half-time lead and gave Manly a big scare but the Canterbury Bankstown Bulldogs then conceded four straight sets and debatable referee calls to ultimately go down 36-18 on Sunday.

The run of Manly possession culminated with a Tom Trbojevic try despite a magnificent try-saving attempt from Jack Hetherington, with the Sea Eagles fullback ruled to have got the ball to the ground despite appearing to lose possession.
The decision incensed Bulldogs coach Trent Barrett.
“The try to Trbojevic which wasn’t a try, how they get that wrong I just don’t know and it changes the game,” he said. “That was a bad one.”
Barrett said to be in front 12-10 at half-time was a fantastic effort.
“But with 70 per cent of possession going against us in the second half in that heat and against a red-hot team like Manly, you can’t win,” he said.
“A few unforced errors at the back end, blew the score out … and we don’t react well to things when they go against us, we’re going to have to work hard on that in the pre-season.”
With 18 from 18 in the first half and then mounting errors in the second half, Barrett said the Bulldogs were not a good enough team to hand teams like Manly such cheap possession.
“Our effort was good but our execution not great at times,” he said.
“The game should have been a lot closer; they are disappointed in the sheds again.
“This week we’ll throw everything we can into finishing the season on a win.”
The Bulldogs take on the Tigers this Sunday from 4.05pm at Moreton Daily Stadium, Redcliffe.