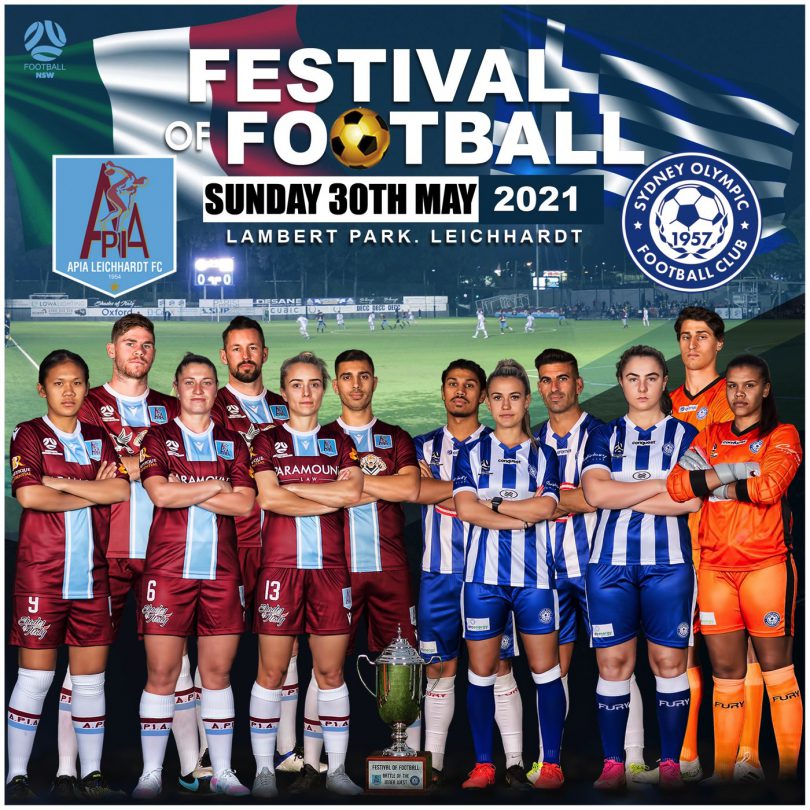 TWO of football’s most famous clubs – Sydney Olympic and Apia Leichhardt – have joined forces to create a Footballing Festival over two days, culminating on Sunday, May 30 at Lambert Park, when one of the two historic clubs will be dubbed ‘The Best in the Inner West’.

The Festival of Football has been created to ensure a whole club atmosphere with the boys and girls Youth League teams playing as a curtain-raiser on Saturday. All eight teams will play a huge part in the overall result of who will be crowned The Best in the Inner West.
“APIA and Olympic are two of only three clubs in NSW who have teams in both the NPL1 Men’s and Women’s competitions, two historic clubs, two proud and two well-supported clubs, who better to do it with,” said APIA President Tony Raciti.
“I think it’s a great concept, including the Youth teams makes it a club focused event and not just primarily on the Senior teams, which improves and builds the culture within the club, something that both clubs do very well already, but it will only grow with an event like this.”
Olympic CEO John Boulous said the festival promises to be annually one of the biggest events on the NPL calendar, and will come to Belmore next year.
“The event will be spectacular, not only will our Youth teams have something extra to play for, but both First Grade Men’s teams have improved in the last month and should be in the top 5 by the time the Festival of Football comes around, between the two First Grade Women’s teams there are over 20 W League players,” he said.
The festival will include a legends game with more than 20 players who have played over 80 times for the Socceroos taking part, live Italian and Greek entertainment and over 30 food stalls’
“It’s without any doubt the biggest NPL Footballing event of the last decade, maybe ever and both clubs are working together to ensure we break the NPL League attendance record.”
The first game kicks off at 9am.