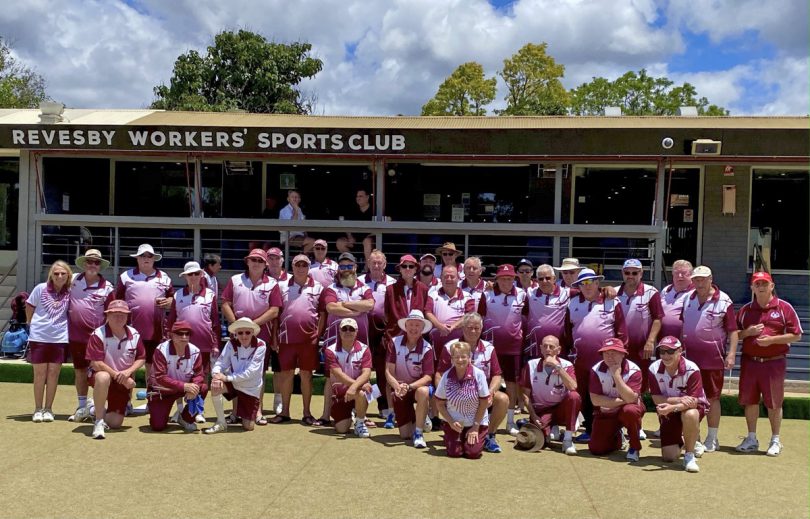 A FEED of prawns and a light-hearted game of bowls was enjoyed ahead of Revesby Workers’ Men’s Bowling Club members receiving their annul achievement awards last month.

Presented by Club Liaison Director Ian Stromborg, the awards event appeared unlikely after the club was closed for 16 weeks over Covid but thanks to some lateral thinking by the committee and player flexibility, all finals were completed barring the graded triples.
The much coveted major singles title was taken out by Laurie Wilson who defeated Adam Whalan in a very close 31 to 30.
The major pairs was won by A Whalan and James Clifton. Triples champions were Geoff Went, Steve Jackson and Laurie Wilson, while the fours was won by Peter Went, Warren Gibson, Shane Matakionga and Dave Raper.
Other championships were won by Wayne Dewberry (minor singles), Wayne Dewberry and Blake Dewberry (minor pairs), Col Flack, Peter Chown (major/minor pairs) and Dave Raper (consistency singles).
The veterens championships saw Laurie Wilson defeat Peter Shean in the singles final, with Denis Gallant and Peter Shean winning the pairs.
In the mixed categories, the fours was won by Sue Semlitzky, Janice O’Brien, Shane Matakionga and Dean Semlitzky.
After completing in three grades of pennants, the fives made it through to the finals at St Johns Park.
The Revesby Workers’ Sports Club surrounds have been refurbished and bowling club president Denis Gallant is encouraging new players to give bowls a go.
“Bowls is a great game for all ages, combining eye and hand coordination and tactical play,” he said.
“Inexpensive, it’s ideally suited to someone who may have retired from other sports.
“So, if you’ve recently hung up the boots or put the bat in the shed, why not have a crack at lawn bowls?”
To find out more, email denlynden@bigpond.com.