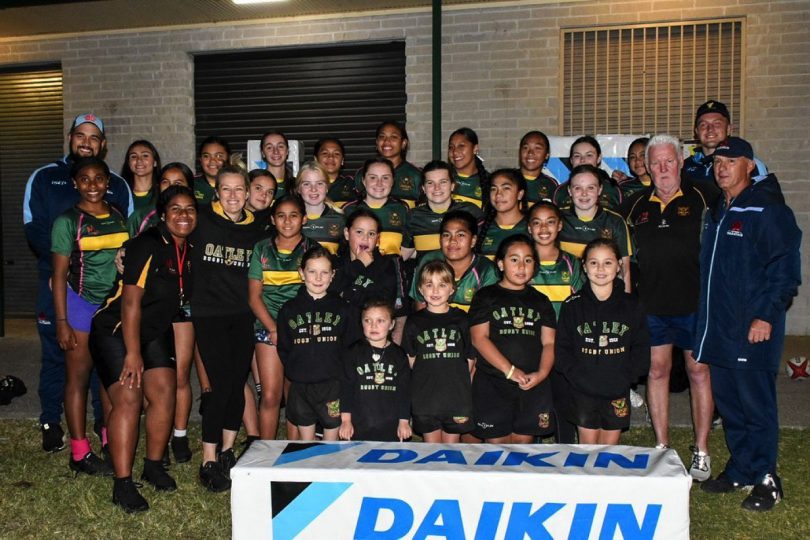 OATLEY Rugby Club has been awarded for its commitment and success in attracting more girls to the sport of rugby union.

One of the few rugby clubs in south west Sydney, it was one of eight clubs across the state which were presented with the NSW Waratahs/Daikin Australia community rugby award, consisting of an array of essential equipment including goal post pads, contact pads, balls, electric pumps plus much more.
The Daikin awards identify different areas of the game to reward and this year it was female rugby, an area in which the Oatley club has excelled.
They received the award in recognition of their commitment and success in growing their girls program.
Oatley’s Director of Female Rugby, Ross Bernays, said the club was extremely proud to receive the award and the training gear will assist coaches in developing the technical expertise and skills of the players.
“Less than two years ago we had just five or six girls wanting to play rugby and that this has grown, through a lot of hard work, to 45 who played in the recent Sydney Junior Rugby Union (SJRU) Sizzling Sevens and the current XVs competition,” he said.
The club is continuing to build its girls program and are recruiting for the SJRU winter sevens series which starts on July 10.
With training for that series to start shortly, Oatley is looking for girls from 10 to 18 years who want to give rugby a go. No rugby experience is necessary with many of the girls coming from a wide range of other sports and “have gone on to really love rugby”.
To get involved: Ross, 0408 625 633 or girls@oatleyrugby.com.