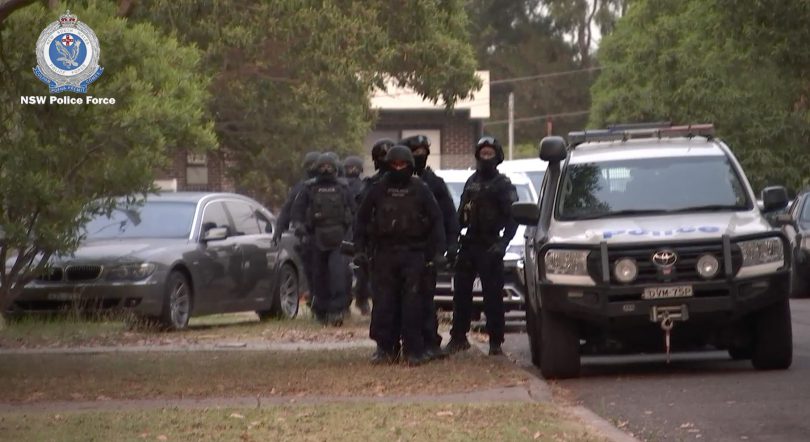 The Criminal Groups Squad’s Strike Force Raptor raided homes in Greenacre, Yagoona and Roselands, and charged a man over his alleged role in a violent brawl at a restaurant in Sydney’s CBD earlier this year.

About 1am on Sunday, October 20, five men were seated at a restaurant on Sussex Street, Haymarket, when one of the men became involved in a verbal argument with an unknown man.
Police will allege in court that the unknown man, who was with four other men, produced a knife, before the two groups become involved in a fight.
During the brawl, several chairs and tables were thrown, and a 34-year-old man was punched unconscious.
Numerous members of the community were in the restaurant at the time, however, they were not injured.
Local police attended, however, the investigation was referred to the State Crime Command’s Criminal Groups Squad.
Following extensive inquiries, Strike Force Raptor executed four search warrants at homes in Greenacre, Yagoona and Roselands, and a Firearms Prohibition Order (FPO) search at Greenacre from 6.30am today (Thursday, December 19).
During the searches, police allegedly seized steroids, prescription medication, and nearly $14,000 cash.
A 33-year-old man was arrested at a Greenacre home and taken to Bankstown Police Station where he was charged with affray.
Investigations are continuing, and further arrests are expected.
Strike Force Raptor was established in 2009 and conducts proactive investigations and intelligence-based, high-impact policing operations to prevent and disrupt conflicts, and dismantle any network engaged in serious organised criminal activity.
Anyone with information, including relevant photos and videos, that may assist Strike Force Raptor can report it directly to investigators via the Strike Force Raptor online reporting page: https://www1.police.nsw.gov.au/Default.aspx?id=49 or call Crime Stoppers on 1800 333 000.
Information provided to investigators will be treated in the strictest of confidence.