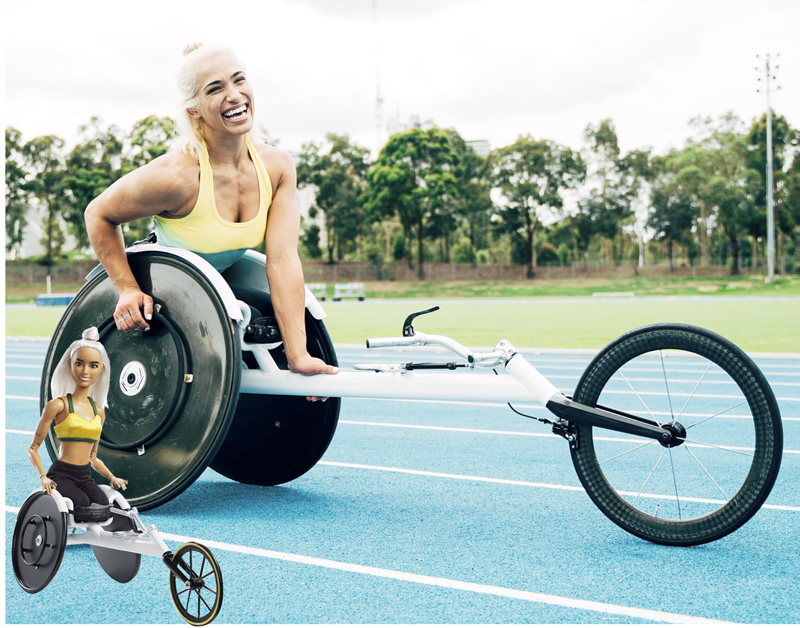 AT her home in Sydney Olympic Park with her ‘iso-buddy’ Sebastian, Paralympian Madison de Rozario says the two-and-a-half-year-old miniature pinscher has been vital to her mental well-being over the past couple of months.

“Without him I would be going stir crazy,” she said.
“He forces me to leave the house every day.”
It’s been a year of highs and lows so far for the 26-year-old, who was immortalised in plastic on International Women’s Day by toy company Mattel, the makers of Barbie, with a ‘Shero’ doll featuring her trademark platinum hair, topknot and racing wheelchair.
“It was a massive, massive honour,” she said.
“I have a tiny Madison doll. It was never even on the bucket list, but I definitely think it’s the highest compliment I’ve ever been paid as a female athlete.”
Then came the news in late March that the Tokyo Paralympic Games would be delayed for a year. Admitting to taking an “easy couple of weeks” before resuming her training regime, she says postponing the event was the right decision even if it makes things difficult for athletes.
“It’s thrown a spanner in the works for planning the build up and there still are a lot of unknowns,” she said.
“We don’t know when the marathon program will start again. They are saying September for the London Marathon but it depends on a lot of things right now. There is so much to consider.”
De Rozario was the youngest competitor in the Australian team when she made her Paralympic debut in Beijing more than a decade ago. A three-time silver Paralympic medalist and two-time gold Commonwealth Gold medalist, she was also the first Australian to win the elite women’s wheelchair race at the London Marathon in 2018.