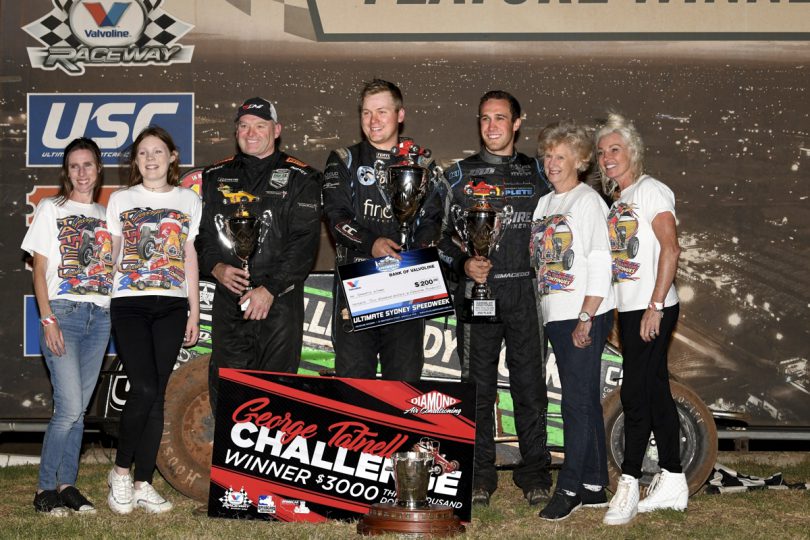 Macedo nearly created history by winning both of the A-Mains only coming up one position short in the Speedcar A-Main after starting at the rear of the 21-car field.
The margin of victory was a ridiculously skinny 0.094s for Stewart as he and Macedo actually made contact only feet before they crossed the finish line.
They may have even crossed the line in the air after the bump.
Macedo took a challenge from VR management after the January 1 event (a hattrick at that point) that would see him double the $3,000 winner’s cheque if he began the 25-lap feature from the rear of the grid and won.
Alone on the 11th row of the grid, Macedo began immediately picking his way through the field while Michael Stewart, Sam Walsh and Nathan Smee began duking it out for the lead.
At times through dense lapped traffic, the lead was up for grabs as the lead trio went at it with Matt Jackson and Harley Smee trying to make their way into podium contention.
Macedo was a whirlwind from the rear and had one last crack at Stewart’s #51, with the lead duo making fairly solid contact as the chequers flew.
The crowd reacted wildly to one of the best Speedcar races seen in some time as Stewart was finally able to wrap up his first main event win of 2019/2020.
Macedo’s second place finish was enough to wrap up the Ultimate Sydney Speedcar Speedweek and Nathan Smee was a rock solid third place ahead of the again impressive Sam Walsh and Harley Smee rounding out the top five.
Liam Camilleri was a jubilant winner in the Legend Car A-Main after proving a little too elusive for the snarling pack behind him despite many yellow light stoppages that allowed the field to close up on him.