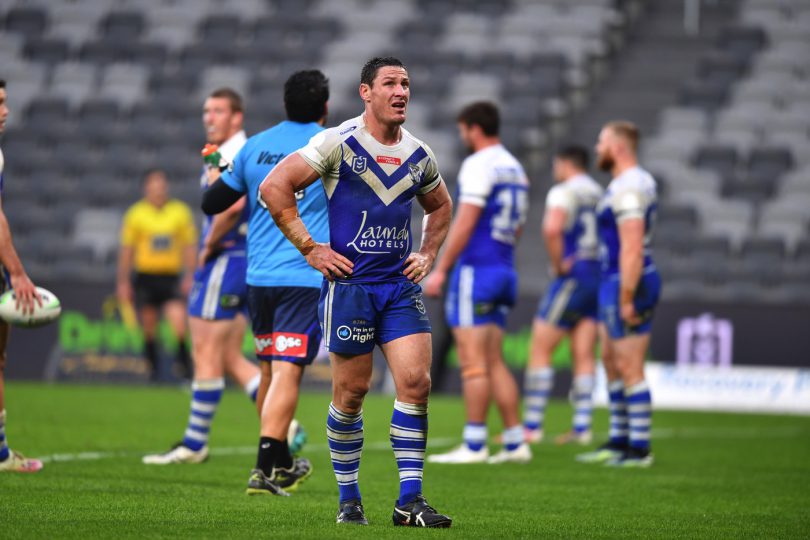 IN his 10th season of first grade and fourth as captain, Bulldogs star Josh Jackson has been named the Dr George Peponis Player of the Year.

Although unable to hold a formal Awards Ceremony due to Covid, the Bulldogs announced the winners of its annual awards as well as paying tribute to players that are leaving.
Jackson led from the front every week and overcame a calf injury during the year to appear in 17 matches, making 786 tackles and averaging 113 running metres per game.
Throughout season 2021, the 30-year old spent time in the back-row, as well as playing that link middle forward role wearing the number 13 jersey.
A Bulldogs spokesperson says Jackson is the heart and soul of the Bulldogs, a player everyone wants to play with.
“He leads by his actions,” he said.
“He is selfless, hard-working and one of the most respected leaders and players within the game.”
In his second season of first grade, local junior Jake Averillo collected the 2021 Coaches Award, after claiming the club’s Rookie of the Year award in 2020, while Bailey Biondi-Odo took out the Steve Mortimer Rookie of the Year, and Raymond Faitala-Mariner was awarded the Peter Warren Medal for his Service to the Community.
Lock forward Kurtis Morrin was named as the Bulldogs’ Jersey Flegg Player of the Year for 2021.
The ball playing forward averaged over 120 running metres per game and was a strong defender, who led from the front with his line speed and aggression.
Morrin, who is also an outstanding leader off the field through his work ethic, leadership and never-say-die attitude, quickly became someone whom his team-mates would look towards to lead the way during the tough moments in the game.