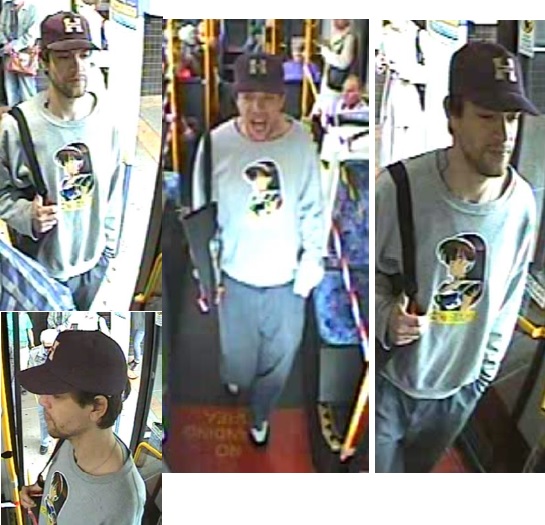 Police have released these CCTV images of a man who may be able to assist with their inquiries into one of two spitting incidents in Marrickville this week.

A man has been arrested and police are appealing for information to identify a second man after two separate alleged spitting incidents at Marrickville this week.

In the first incident, a man boarded a bus on Marrickville Road, near the intersection of Garners Avenue, about 11.45am on Monday and when the bus driver, a 42-year-old man, spoke to the passenger about failing to pay his fare, he began yelling and spat at the driver.
The man got off the bus and was last seen walking towards Marrickville Railway Station.
Inner West Police are investigating.
As part of inquiries, police have now released CCTV images of a man who may be able to assist with their inquiries.
The man depicted is described as being Caucasian appearance, aged his 30s, of a medium build, with brown hair, and wearing a grey jumper with a cartoon motif on the chest, dark coloured pants, a cap, and is carrying a black tote bag.
In the second incident, police were called to a supermarket at a shopping centre on Victoria Road, about 2.30pm yesterday (Tuesday), following reports a man spat on an employee.
It’s alleged the 26-year-old male employee was speaking to a man outside the store when he was spat on.
Following inquiries, a 40-year-old man was arrested by police at a Broadway shopping centre 9.20am today (Wednesday).
Anyone with information about the incidents is urged to contact Crime Stoppers: 1800 333 000 or https://nsw.crimestoppers.com.au. Information is treated in strict confidence.