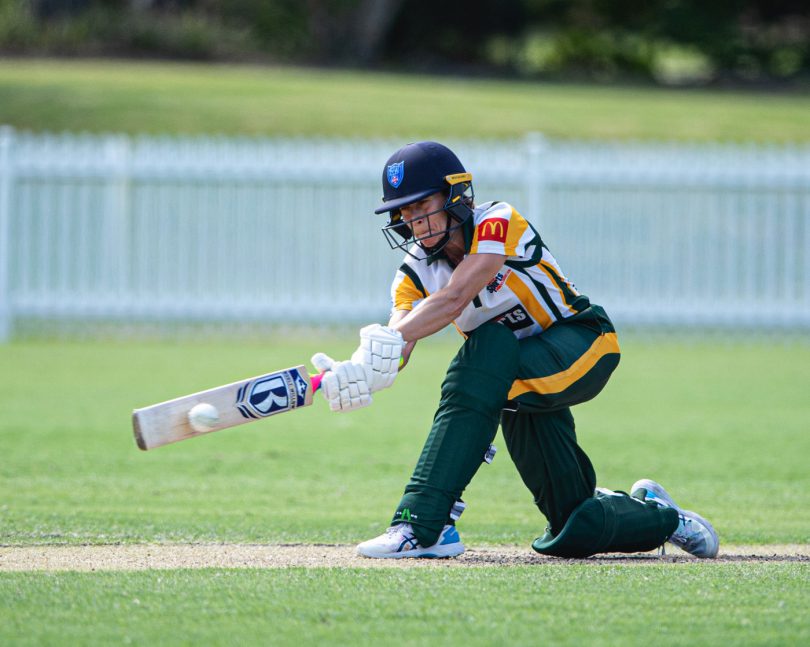 Bankstown Sports won the toss and sent Campbelltown-Camden in. The Ghosts got off to a relatively good start, but the wickets then started to fall in regular intervals to slow the scoring rate and keep Campbelltown to a respectable 7/207. Gardner was the pick of the bowlers with 2/23 off 10.
A change at the top of the order saw Tahlia Dunne (15) open with Sarah Aley (25). They scored 43 before the first wicket fell.
The wicket brought Gardner to the crease who scored 48 off 35 deliveries to swing the game well and truly into Bankstown’s favour.
When Burns got going, there was no stopping her hitting the ball to all areas and finishing 86 not out off only 55 deliveries.
Angelina Genford combined for a 4th wicket partnership of 83 and ended up finishing on 25 not out to guide Bankstown to victory in the 32nd over.
The Bankstown Sports U18 Brewer Shield side were unable to make a competitive total after losing 5 wickets for just 15 runs against Parramatta on Sunday.
Bankstown were all out for 84 but Maeve Martin fought hard for her 33 runs rebuilding the innings with Tyra Cooper, 12 and Madison Rutherford, 14. In reply, Parramatta chased down the total in the 22nd over.
Bankstown Sports U15 Sixers Cricket League had a fantastic win against Como-Jannali.
The Bankstown District Cricket Association U13 Mollie Dive girls went down by 12 runs against North Shore Blue. Rayani Jayawardana and Bella Stevens both picked up three wickets while Katelyn Dancy also finished with 2 wickets off her 1.4 overs. Aditi Shidore top scored with 34 and was well supported by Jayawardana with 21.