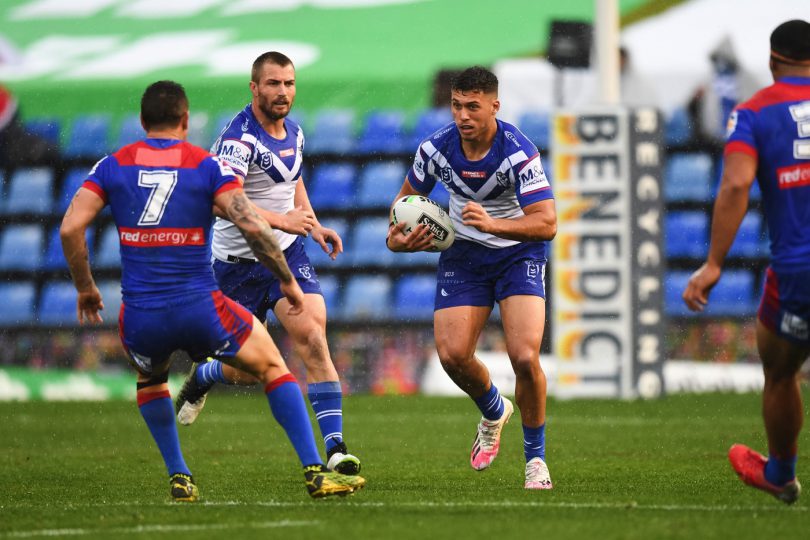 FINDING their bark at last, the Bulldogs clung onto an 18-0 lead over top-four favourite Newcastle on Sunday to prevail deserving 18-12 victors for just their second win of 2020.

Off-contract prop Aiden Tolman started the ball rolling with his first try since 2017, capitalising on a glut of early possession created by five Newcastle errors in the opening 20 minutes.
Kieran Foran put what should have been Canterbury’s second four-pointer on a platter as well with a pinpoint grubber soon after, but Jake Averillo couldn’t hang on.
Newcastle were never out of the contest, but rarely looked like breaking it open with few chances at the Bulldogs line.
A barge over from Raymond Faitala-Mariner continued momentum immediately after the break.
Five minutes later Foran was at it again with another dink into Newcastle’s in-goal and Averillo made up for his earlier spill.
It was only at the hour-mark that Newcastle showed signs of life.
Rugged Knights defence kept the game well and truly in Canterbury’s territory, with the Bulldogs somehow keeping the tight lead intact.
It was Bulldogs interim coach Steve Georgallis’ first win as a head coach since late 2011.
And for a team who haven’t experienced winning much in 2020, Georgallis said it was well and truly savoured.
“Last week they put in a great effort … and unfortunately our game management wasn’t up to scratch.,” he said.
“We saw a little bit of that today, and lucky for us Kieran Foran was out there.
“Some of his kicks towards the end of the game helped and hopefully as a team we can understand that what you do at the end of the set is just as important as what you do at the beginning. I just can’t thank the players enough for the win. It was a great feeling.”
Bulldogs next take on Eels on Sunday from 2pm at ANZ Stadium.