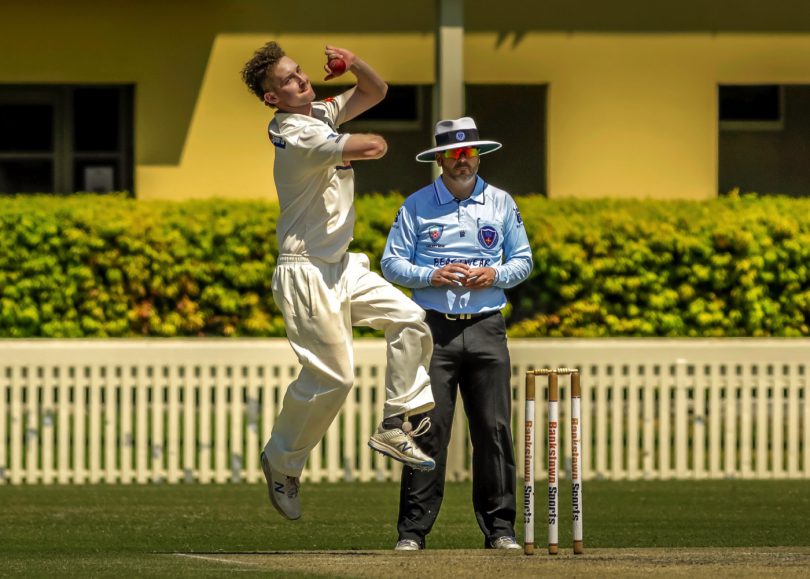 THE Bankstown Sports Bulldogs were involved in a titanic struggle against the Sutherland Sharks at Memorial Oval last Saturday.
The visitors had first use of the beautiful Bankstown batting strip and made the most of it early in the day.
Nathan McAndrew unleashed some aggressive bouncers peppering the Sharks openers. He eventually trapped Arnold LBW on his crease with a superb delivery which would have toppled the timbers.
Left arm spinner Ben Taylor had the dangerous Doyle well caught at first slip by the ever-alert Daniel Solway.
When lunch was taken, the visitors were batting soundly with 2-100 and a big score looked imminent.
The Bulldog bowlers probed away relentlessly after the interval.
The visitors fought hard to get to 158 but lively Ben Le Bas struck to get rid of Jarryd Biviano with the help of vigilant Jake Cormack and his ultra-safe hands.
McAndrew struck again when he got the edge of the bat for acrobatic keeper Matt Simpson to pounce on the chance. At 4-223, the Sharks were circling in quest of a huge score, but this got the Bulldogs barking vociferously and wickets started to tumble rapidly.
Taylor lured Daniel Fallins into a mistake which Liam Marshall gleefully held aloft and the tide was beginning to turn. Le Bas did it all himself with a classic caught and bowled and the home side were back in charge.
Speedster Brad Simpson joined in the LBW brigade with a thunderbolt and the Sharks had slumped to 8-236. Le Bas caught the edge and ever alert Simpson snapped up the chance but then a stubborn last wicket stand frustrated the locals.
Former Bulldogs paceman Tushaar Garg played a very neat innings to remain 25no and along with Steven Milliken (15no), hit out boldly in a 35 run partnership with the visitors 9-284 at stumps and leaving the match delicately poised.
Thunder star McAndrew hurtled down 19 explosive overs and claimed 3-50. Le Bas was most impressive with 3-48 in his marathon 26 over spell. His accuracy sunk the Sharks at a crucial time and his 7 maidens highlighted this. Taylor chimed in with 2 wickets and Matt Simpson kept his fieldsmen firing while giving another excellent display behind the stumps.
They return to Bankstown Oval this Saturday.