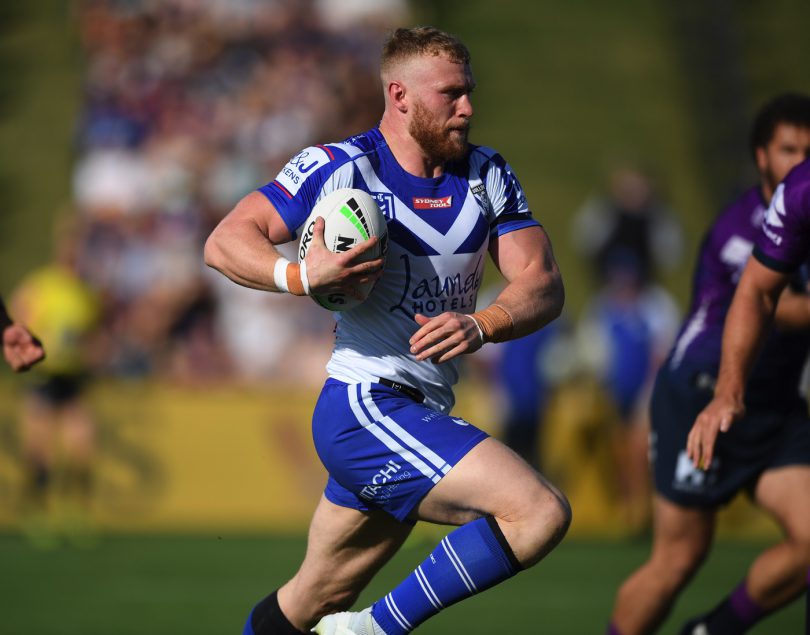 THOUGH preparing well for a possible drenching and confident the opposition was without its stars, Canterbury Bankstown Bulldogs failed to find shelter, going down to the Storm at Sunshine Coast Stadium on Saturday, 41-10.

It was a scrappy start from both sides with the Bulldogs getting first shot at points.
Learning from last week’s mistakes, the Bulldogs took the safe option and went for a penalty goal.
However, young gun Jake Averillo shanked it and the ball went to the left.
The error would set the tone for the rest of the opening half.
A Lachlan Lewis cut-out pass was snaffled by the Storm who raced 90 metres to score under the sticks and it soon became 12-0 in as many minutes.
Kieran Foran always looked most likely to be the provider for the Bulldogs and he was for their first try courtesy of a looping ball to new recruit Tim Lafai to score, leaving them trailing at halftime, 23-4.
Desperate for a big start to the second 40, Reimis Smith caught a high ball to score. Kicking duties were passed onto Lafai who converted to bring the score to 23-10.
Canterbury’s momentum came to a screeching halt when Lewis collected a Storm’ player around the neck in an ugly high shot and was sent to the sin bin.
The Bulldogs still looked threatening when their foe raced 80 metres to score again, putting the result beyond doubt.
Very disappointed with the outcome, Bulldogs interim coach Steve Georgallis said the Bulldogs came up with wrong plays at the wrong time.
The Bulldogs have had to make some changes for the match against the Wests Tigers at Bankwest Stadium on Sunday.
Lachlan Lewis took an early guilty plea for a careless high tackle on Cameron Munster and will miss one week through suspension. Jack Cogger will come into the halves in his place to partner Kieran Foran. In the centres, Jake Averillo suffered a hip injury against the Storm and has been replaced by Kerrod Holland.