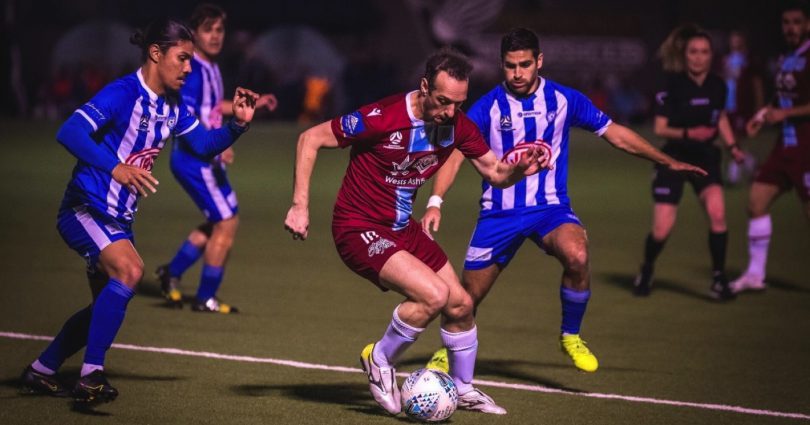 SYDNEY Olympic missed several chances to take the lead and in the end had to settle for a draw with rivals APIA Leichhardt.

A second-half strike from Sam McIllhatton helped APIA Leichhardt fight back to claim a 1-1 draw during their Festival of Football clash on Sunday where over 4,000 people watched on three quality matches.
In front of a raucous Lambert Park crowd, Sydney Olympic took the lead in the first half through Oliver Puflett before McIllhatton equalised for the home side midway through the second stanza.
The game, which had been peppered with some solid challenges, descended into a midfield push-and-shove between most players and, in the end, three players saw themselves moved into the referee’s book just prior to the break.
APIA hit back in the 55th minute with a goal to McIllhatton.
It was a game that had everything but a winner as both sides repelled wave after wave of attack on a big day for the historic clubs.
The result was a missed opportunity for both clubs to move closer to the top five and finals place.
Sydney Olympic coach Ante Juric was similar in his appraisal of his team and he too knew that three points were also his side’s for the taking.
“I am a bit disappointed because we are not winning games that we probably should after making a good start,” he said.
“However, I can’t be prouder of the spirit and effort regardless of the bad luck going against us.
“Finishing our chances has been the story of our season because if we had have finished them all, we would be at the top of the table.
“We have some very young players, and we are getting the chances which is good, but we just need the composure to take them.
“I am sure though it will come.”