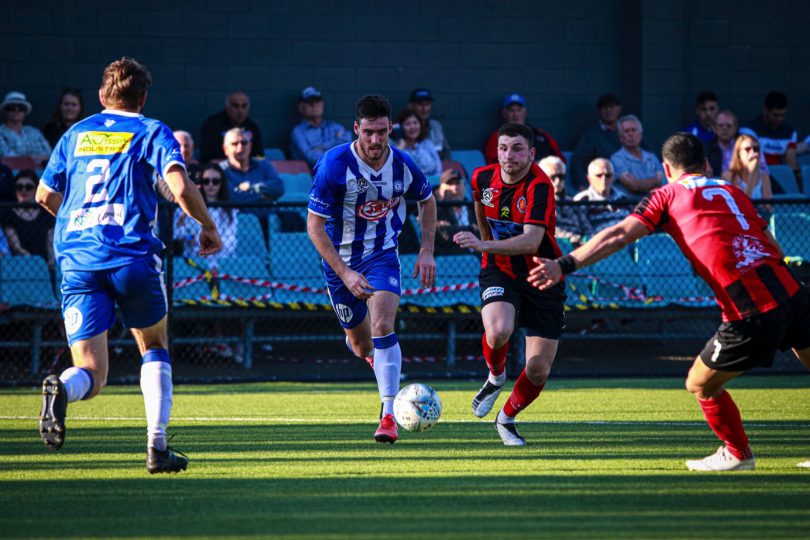 SYDNEY Olympic has bowed out of the race for the National Premier Leagues NSW Men’s title after they were well beaten by newly crowned premiers Rockdale Ilinden at Ilinden Sports Centre on Saturday night.

Steve Zoric’s men brought their season form into the crucial semi-final clash as they proved far too hungry for their opponents whose defensive errors ended up being their downfall.
Rockdale kicked off things with a great opening goal in the 29th minute thanks to a stunning Michael Neill strike.
It was some decent build-up play from the Ilinden back-line that saw Banri Kanaizumi launch a long ball forward that saw Patrick Savor expertly nod it through to a rampaging Neill who ripped the leather off the ball with a venomous strike sending the home fans into raptures.
Neill then turned the game on its head with two minutes remaining before the break after picking up a loose ball and playing a lovely one-two, brought down in the box by Olympic’s Jason Madonis.
Referee Katie Patterson had no hesitation in awarding the penalty which was expertly dispatched by Japanese import Tomoki Wada.
It was a huge blow for the Blues who went into the half knowing they needed a herculean effort in the second to get back into the match.
But it wasn’t to be for Ante Juric’s men, with young gun Jaden Casella pouncing on yet another defensive blunder by Olympic in the 57th minute to give Rockdale a 3-0 win.
Rockdale Ilinden FC and Sydney United 58 will go head to head at Marconi Stadium this Sunday.