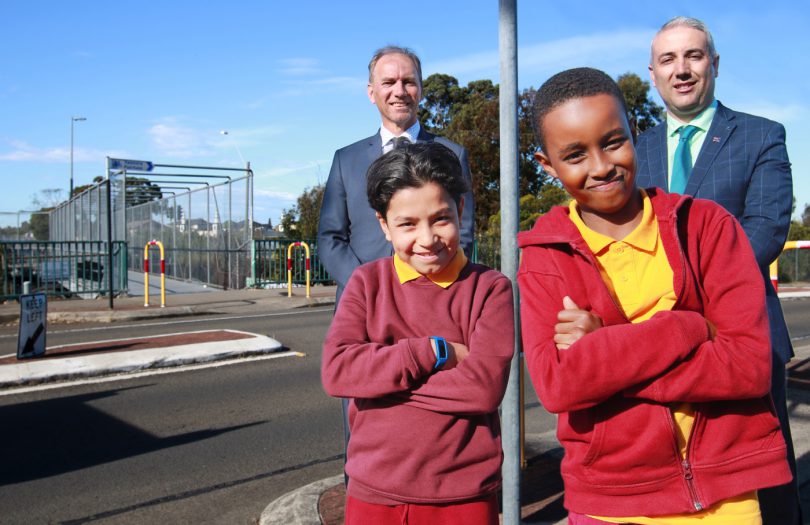 A CONCERTED campaign led by two Guildford Public School students, has succeeded with the installation of a new pedestrian crossing during the term break.

Principal Chris Haberecht said he was “very proud” of the perseverance shown by Akram Omar and Mohamad El Omran who repeatedly lobbied for a safer crossing adjacent to the school on Military Road, near the corner of Trenton Road.
“They are my absolute champions,” he said.
“They kept coming to me and asking me to call and email the council again and again.”
School captains Zeyjan Olca and Iftikhar Mirzai also praised the persistence of their fellow students and said they proved “that not all heroes wear capes”.
Describing them as “lion-heart champions”, Iftikhar said the pair used their initiative to approach Mr Haberecht with their safety concerns and he helped them take action.
Zeyjan said the boys continuously attempted to get the council to notice the hazardous situation near the school.
“Sometimes they didn’t get a reply but that didn’t stop them from fighting and believing,” she said.
Mayor Steve Christou also met with the young advocates and said following their active representations, the council approved the crossing in September last year after a traffic analysis and community consultation.
“Students have been terrific advocates for this crossing, and I’m glad that the council is in a position to make this happen,” he said.
However he also reminded drivers to always give way to pedestrians, even if there is no marked crossing, and to be patient, especially with those who may take a longer time to cross the road.
“Don’t assume someone crossing the road has seen you,” he said.
“If you’re a pedestrian, please look for cars coming from all possible directions, before crossing and look for bicycles and motorcycles as well.”