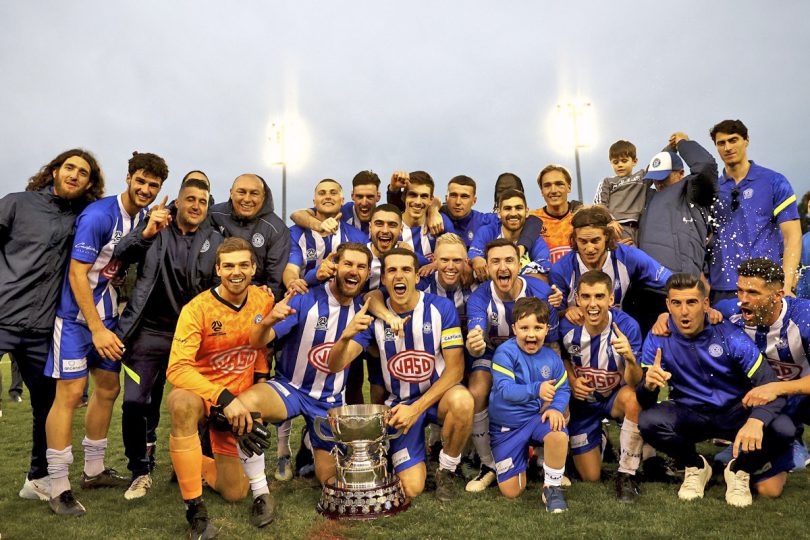 THE script couldn’t have been written any better as a bumper crowd was on hand to witness the final round of the NPLNSW Men’s competition as Sydney Olympic seized the Premiership title with a 2-0 victory over Blacktown City at Belmore Sportsground on Sunday evening.

To cap off a great season, Roy O’Donovan, who was sitting on 19 goals for the season, one behind Alec Urosevski of Rockdale Ilinden, in the race for the Golden Boot, kicked two goals to secure the title on a tense nerve-wracking day at Belmore.
Adam Parkhouse fired the first shot in the fifth minute when the ball fell invitingly after an Oliver Pufflet air swing to half-volley goalward that, unfortunately for the Olympic fans, rattled the crossbar and fell away for a goal kick in what was a bustling, if somewhat nervy, start to the match.
Blacktown, having weathered the storm, were starting to make in-roads but it was O’Donovan who opened the scoring, his 20th of the season, with a towering header from a Parkhouse cross in the 23rd minute.
In the 58th minute a defensive mix-up between Campbell and Robinson allowed the striker to nip in and net his second of the match – earning him the Golden Boot outright for his 21st of the campaign.
An obviously jubilant Sydney Olympic coach, Ante Juric, was delighted with the result.
“We dominated at home, which is nice, and is something we obviously wanted to do,” he said.
“It was important we did that with so many fans here but it was very tense out on the pitch and I’m super proud of how they played and the passion and commitment was plain to see.
“To go down to the wire and become Premiers on the final day is special and we’ll enjoy the moment before we get our heads together for the finals games.”