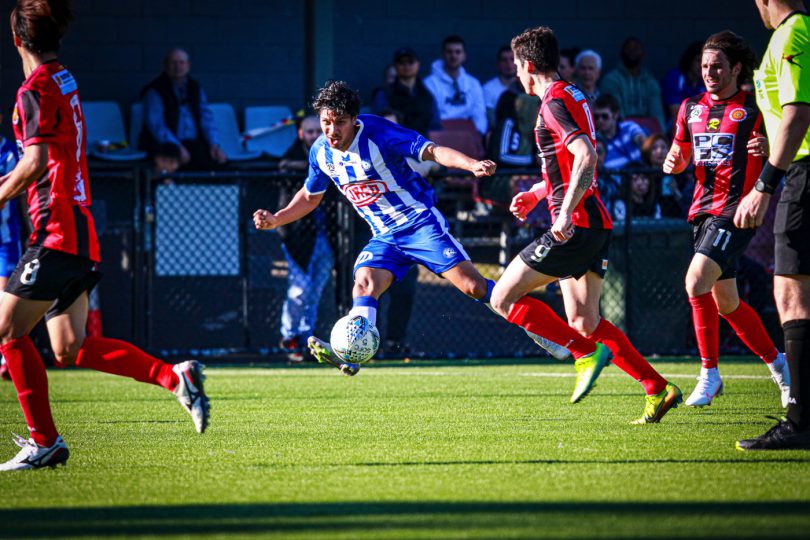 SYDNEY Olympic has cemented their spot on the top of the National Premier Leagues NSW Men’s ladder with a 4-2 win against APIA Leichhardt Tigers at Lambert Park on Sunday.

A first-half double from Charles Lokolingoy and a double from Adam Parkhouse after the break, helped the Ante Juric coached side to victory and a vital three competition points.
It didn’t take long for Sydney Olympic to take the upper hand against a struggling APIA outfit with Lokolingoy finding the back of the net after only 12 minutes.
The Olympic marksman made the most of a chance opportunity to fire the home side into the lead with a clinical finish from only nine yards out.
It took only a few more minutes for the former Sydney FC frontman to claim a brace when he fired into the back of the net after a sensational marauding run from central defender Thomas Whiteside.
APIA’s veteran star Franco Parisi gave his side hope when he rifled a shot into the back of the net in the 23rd.
Neither side would add to their tally before the break with Olympic leading 2-1 at the interval.
Olympic would stretch their lead midway through the second stanza when Adam Parkhouse fired one in with his left to make it 3-1.
The former Wellington Phoenix player saved his best for later when he unleashed a thunderous strike from 35 yards out which cannoned into the back of the net after 76 minutes to make it 4-1.
Mitchell Gibbs claimed a late consolation goal for APIA with the last kick of the game after he linked up with Josh and Sean Symons.