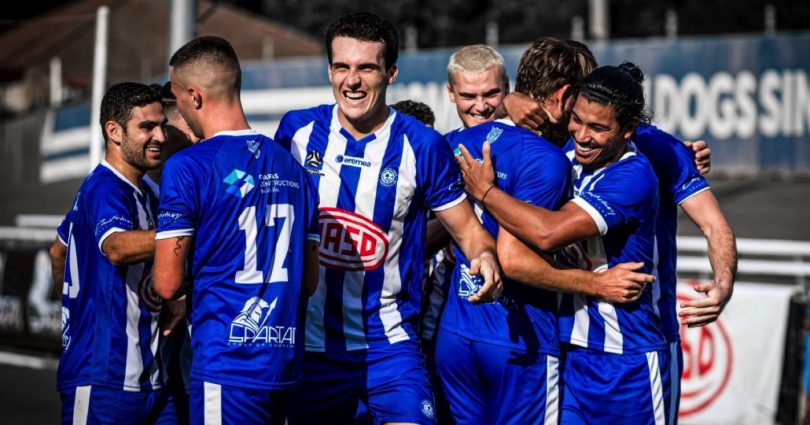 SYDNEY Olympic have pulled themselves out of the bottom three with a hard-fought 2-1 win over Sydney FC at Rockdale Illinden Sports Centre in the National Premier Leagues NSW Men’s competition.

The former NSL giants were knocking on the door early when the first chance fell to Michael Glassock who headed a curling Brendan Cholakian free-kick toward goal forcing Adam Pavlesic to tip over the bar in the seventh minute.
Sydney FC answered back five minutes later when Aidan Simmons danced across the box and fired a shot to the near post that rattled off the upright and out for a goal kick.
Oliver Puflett should have broken the deadlock in the 51st minute when Jason Madonis burst toward the by-line with his hanging ball meeting the strikers who headed wide from close range.
Sydney Olympic finally got their goal when the short corner variation was swung in by Adam Parkhouse to the towering head of Benjamin Van Meurs who beat the keeper to put his side in front.
The victory was sealed for Sydney Olympic in the 84th minute when Fabian Monge won the ball in midfield and set free a charging Madonis with a long ball before he calmly lobbed Pavlesic off his line.
Cameron Fong pulled one goal back for Sydney FC with a beautiful free-kick in the 90th minute.
The second half saw a big momentum shift for both teams but Ante Juric was confident his team would put Sydney FC away.
“We missed a lot of chances that kept them in the game,” Juric said.
“In the second half, we saw a few balls over the top, a few runs in behind.
“We can’t be static in attack and we changed that.
“We’ve been playing well, we might have lost to Sydney United and Rockdale but we need points on the board, they really deserved this one.”