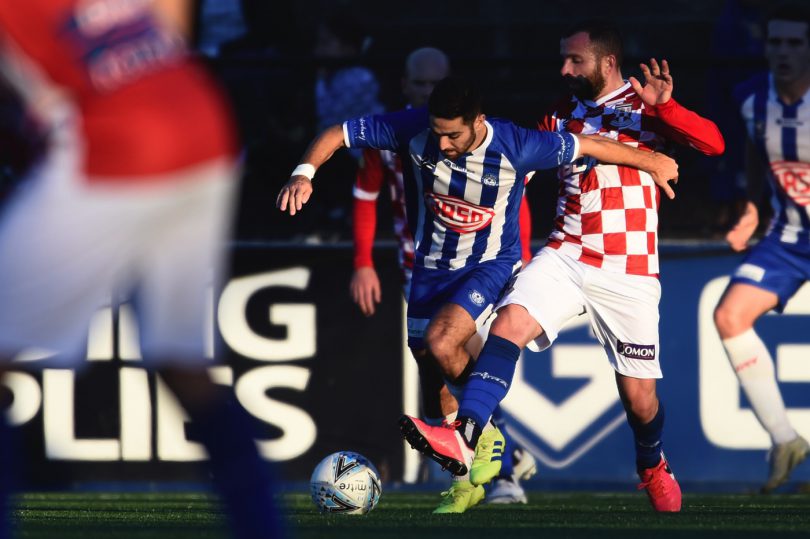 AFTER a scoreless first half, Sydney Olympic let Sydney United 58 run away with the game 3-1.

United scored three goals in the second half before Olympic finally landed one in the net in the National Premier League NSW clash.
Matt Sim had the first real chance of the game when United 58 was awarded a free-kick just outside the box, but his curling effort went just over the bar.
Olympic threw themselves in the mix for an opener but were denied several times within a minute after the valiant United 58 defence blocked shots from Daniel Dias and Oliver Puflett.
United’s inspirational skipper Adrian Vlastelica opened the scoring in the 56th minute shortly before red-hot striker Patrick Antelmi doubled the hosts’ advantage.
Experienced striker Chris Payne made his presence felt off the bench after assisting Antelmi, scoring his own in the 75th minute.
Olympic’s Mo Adam scored a sensational solo goal in the dying stages of the game, in what would only be a consolation as Sydney United 58 walked away with a comfortable win.
Ante Juric credited the tough United 58 outfit but was disappointed with his side’s defence errors, despite the traditional rivals battling intensely from the opening hour.
“Obviously they’re a very good team, they dominated a lot of the passages, the first half we kept them out, then in the second half we slept for five minutes and copped three goals,” Juric said.
“Away from home you can’t do that, all three goals probably came from our mistakes.
“I was happy with the spirit but not the performance, I thought we were solid until the mistakes, we created a few chances, we probably had the better chances in the first.”