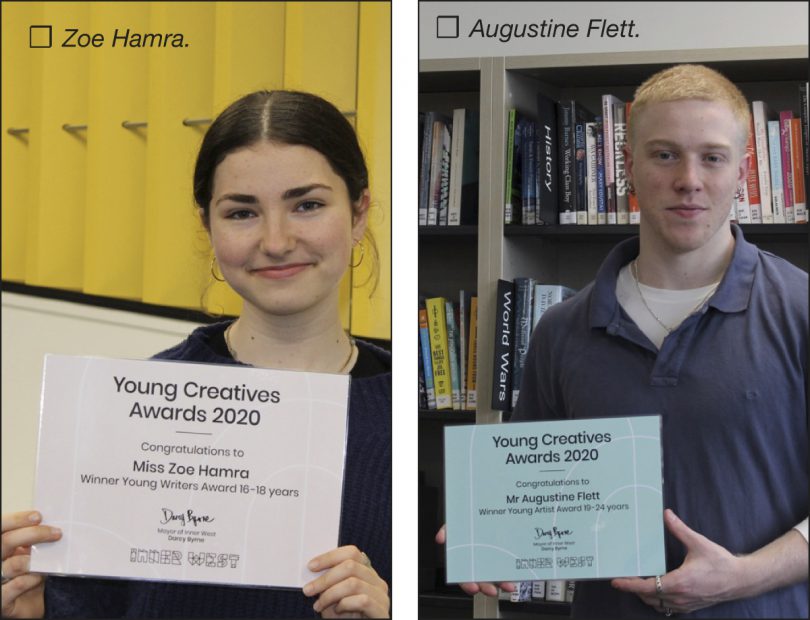 A GROUP of talented young illustrators and writers have been recognised out of a record 150 entries at the Inner West Library and History 2020 Young Creatives Awards, with Marrickville’s Lily Cameron collecting the Young Writer Award (19-24 years) and winning $500.

Runner up was Petersham’s Rinjani Soengkoeng who won $250.
Ms Cameron’s work was described by one judge Nadia Wheatley as: “Clever, complex and challenges the reader. On first reading it was great. On second reading, it was brilliant.”
Saying the essay was inspired by her mother, Ms Cameron said: “I’m very grateful to be awarded first place.”
The Young Artist Award (16-18 years) winner was Tempe’s Mia Economou; Young Writer Award (12-15 years) winner was Marrickville’s Kiet Phan; Young Writer Award (16-18 years) was Marrickville’s Zoe Hamra; and Young Artist Award (19-24 years) winner was Marrickville’s Augustine Flett, with all winners receiving $500.
Mr Flett said art was his whole life.
“I want to be creative for the rest of my life,” he said.
“It doesn’t only give purpose and meaning – my art is purely mine, there are not structures or systems in place that can take that away from me.”
Judge Ursula Dubosarsky said: “The standard of the works was extremely high, so it was enormously pleasurable but it also made the judging very difficult. Everyone should be congratulated.”
Judges also included Dub Leffler and Ronojoy Ghosh who said: “I was blown away and so surprised happy to see such different works.”