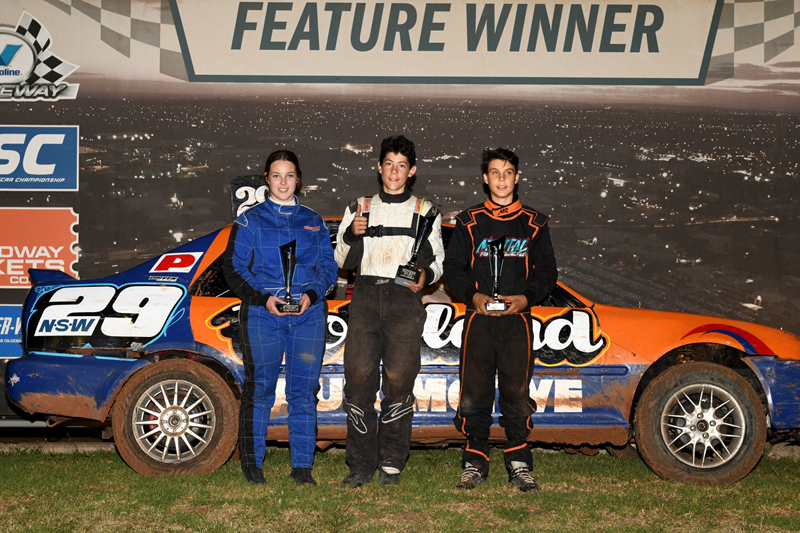 NATHAN Smee took the ‘One Lap Down Challenge’ in the CEJN Pty Ltd Spring Speedcar Spectacular last night at Sydney’s Valvoline Raceway but it was Matt Jackson who scored yet another main event win.

Jackson scored his fourth victory of the season from Michael Stewart again on the podium for second, while Harley Smee found the final spot in the top three ahead of Troy Jenkins’ second consecutive fourth place finish.
Shane Cartwright was again victorious in the AMCA Nationals A-Main but had to fight off the Kime family for the chance to stand on the top step of the podium.
Newcastle veteran Raymond Kime held off son Darrell in the battle for second while Spano Guttierez and Blake Conyers rounded out the top five in a stout A-Main AMCA battle.
Mark Heaton was not his usual dominant self in the early part of the night but the Australian Compact Speedcar Champion saved his best for last with a ripping win in the A-Main to defeat Shaun Robinson and Steve Zarb in the battle for the win and podium.
“Killer Kiona” Sunerton was another Australian Champion to take the win in the Street Stocker A-Main making a successful return competition in her beloved Falcon.
Jaiden Healey took an emotional A-Main victory in the Junior Sedans at the track where his family have played such a pivotal role over the 40 years.
The young man who also races Junior Sedans, is a third generation racer whose Dad Ray has been a celebrated Street Stocker track champion and whose Grandad Lyle was a stout Monza sedan racer in the 80s and also tasted many victories.