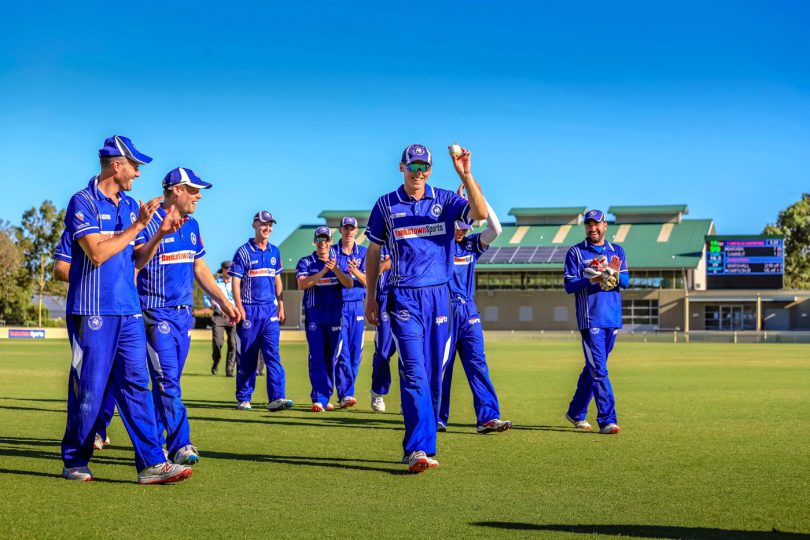 BULLDOGS left arm orthodox spinner Ben Taylor (pictured) captured 5-13 to lead the side to a decisive victory over Fairfield in the Kingsgrove Sports T20 Cup at Memorial Oval on Sunday.

THE Bankstown Sports Club Bulldogs had to be content with first innings points at Memorial Oval last Saturday against the Campbelltown Ghosts.
When play resumed Bankstown had the whip hand as the visitors were 3-25 in the second innings in the Sydney first grade cricket competition. In their first innings they had scored a meagre 132 and in reply Daniel Solway declared at 7-194.
The Bulldogs were hoping Campbelltown would capitulate again, but the visitors provided much sterner resistance the second time around.
They battled hard all day and cricket enthusiasts enjoyed the tight tussle on the Bankstown website with David Clifton and his much-loved live streaming of the game.
The Ghosts indifferent batting vanished as they stopped the Bulldogs in their quest for 10 points with some defiant and disciplined batting. They cobbled together 250 and in reply Bankstown had lost 2-37 at stumps.
The Bankstown bowlers toiled away with great enthusiasm, but the Ghosts held on in a much-improved showing from the first dig. Paceman Liam Hewitt once again was amongst the wickets and his 3-67 haunted the Ghosts in excellent conditions.
Hewitt hurtled down 17 overs and despite his marathon efforts kept his pace troublesome all day.
Fellow Speedster Blake Pearson was on target as usual and confirmed his pace bowling prowess which continues to impress. Left arm spinner Ben Taylor was at his economical best using his flight and variations to pin the Ghosts batsmen down. The promising allrounder claimed 2-46 and was accuracy personified. Taylor received high praise indeed from no lesser light than Greg Chappell.
The cricketing guru said he could see similarities between Ben and NZ great Daniel Vettori. He elaborated because of his height Taylor has the ability to get bounce particularly if the pitch is not turning. Chappell added that Taylor could turn into a very useful middle order batsman enhancing his all-round potential.
The likeable cricketer was a fast bowler, but injury forced him to bowl spin which was a blessing in disguise.
Daniel Nicotra claimed 1-34 from 12 with his leg spin whilst Ben Le Bas took 1-11 from 5 and persistent Dayne Heward took 1-12 from 5. In the Bulldogs 2nd innings that man Nicotra finished with 23 not out. This Saturday the Bulldogs take on the Dragons at Hurstville in a two-day fixture.