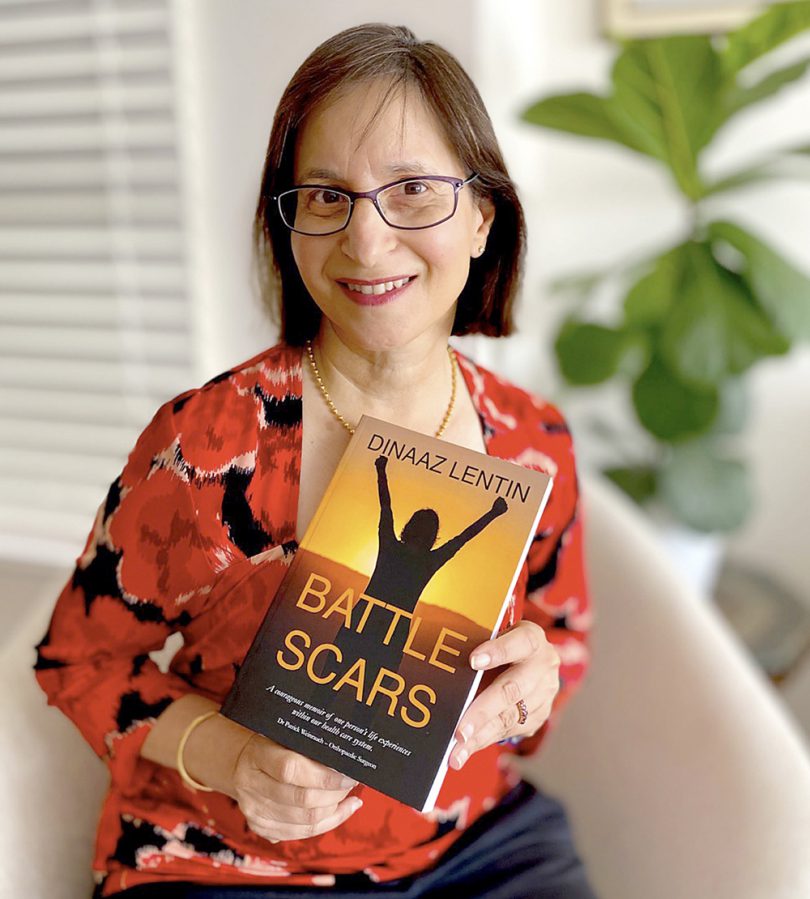 Dinaaz Lentin with a copy of her book, ‘Battle Scars’, which she hopes will inspire change.

AT the age of 19, Dinaaz Lentin woke up from knee surgery to find her left leg in bandages and realised with horror that her surgeon had operated on the wrong leg.
Unfortunately that incident was not the last or even the worst experience the 61-year-old has had with the Australian medical system and she has detailed those interactions over the past four decades in a self-published book Battle Scars.
The memoir includes her battle to convince her doctors she suffered from a rare rectovaginal fistula after the birth of her daughter was mismanaged, as well her long road to recovery after each of her arms was paralysed in separate incidents as a result of complications from an anaesthetic.
While convinced that mistakes are an opportunity to improve and shape the future, she says the culture in medicine needs to change, adding that near misses and incidents should not be “swept under the rug”.
“It goes without saying that wherever there is human involvement, errors are unavoidable,” she said.
“It’s alright to make mistakes as long as you don’t repeat them.”
However, the Revesby resident hopes people will see her story as a catalyst for positive change.
“I’ve actively tried to keep a big distance away from self-pity,” she said.
“Growing up, I’d always been taught that things happen for a reason. Whatever the reasons, no one really knows, but the answers are revealed at the right time.
“I am grateful to each and every one of my experiences, as I’ve learned many invaluable lessons along the way.”
A hard copy of Battle Scars costs $35 at dinaaz.com, and is also available purchase as an e-book through Amazon or for loan from Bankstown Library.