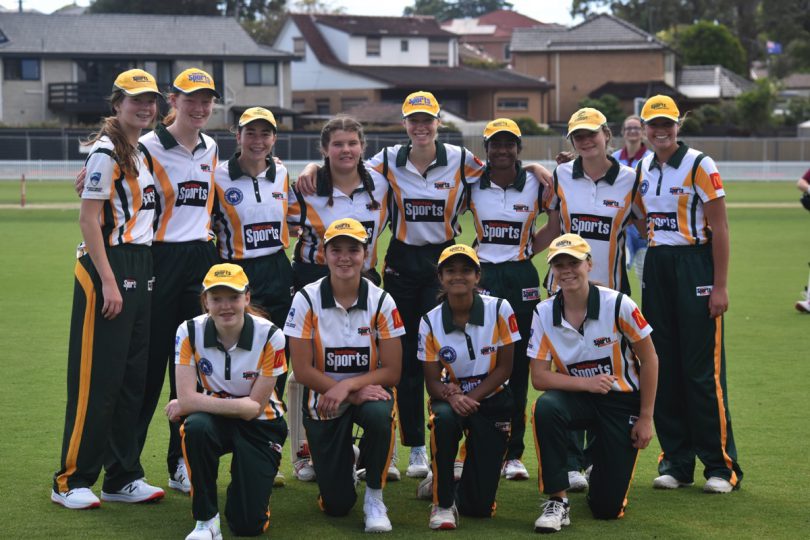 Sent into bat first and after a wicket loss, Bankstown needed to consolidate which they did through Tahlia Dunne (25) and Erin Burns (34) who shared in a 50-run partnership.
Losing them both in quick succession slowed the runs but Bankstown managed to get to 6/85 off their 20 overs.
However opening bowlers Emily Lawler (0/9 off 4) and Alice Whelan (2/13 off 4) set the winning tone and St George were never able to score at the required rate, with their innings coming to a close at 7/76.
BSWCC Second Grade side also had a terrific win against St George.
They were able to keep them to 2/116 off their 20 overs with Tyra Cooper 1/13 (4) and Shekinah Lowe 1/16 (4) the wicket takers.
In reply, Cynthia Coghlan finished with the first half century of the season.
Third Grade performed well too, with Gordon batting first to finish with 3/147 off their 20 overs. Captain Brianna Fraser was the pick of the bowlers with 2/32 off 4 while Alanna Yates was the other wicket taker with 1/25 off 4.
Fraser, 15, Khadija Brown, 11no and Steph Kelly, 10no all made great contributions but in the end finished short of Gordon’s total to end with 3/109 off 20 overs.
The BSWCC U18 Brewer Shield team went down by 15 runs to St George.
They started well with a 44-run opening partnership between Mriulda Thirupathy 39no and Chrissa Stathis, 21, but in the end fell short with 4/103 off 20 overs.
The BSWCC U15 Sixers Cricket League girls bowled first against Leichhardt Wanderers Red. Bree Kurtz picked up an early wicket 1/29 (4) followed by another from Ishpreet Randhawa 1/25 (4) .
Katelyn Dancy 2/9 (4) excelled while Jessica Robertson got the last wicket with 1/5 off 3.1 for Leichhardt to finish all out 140.