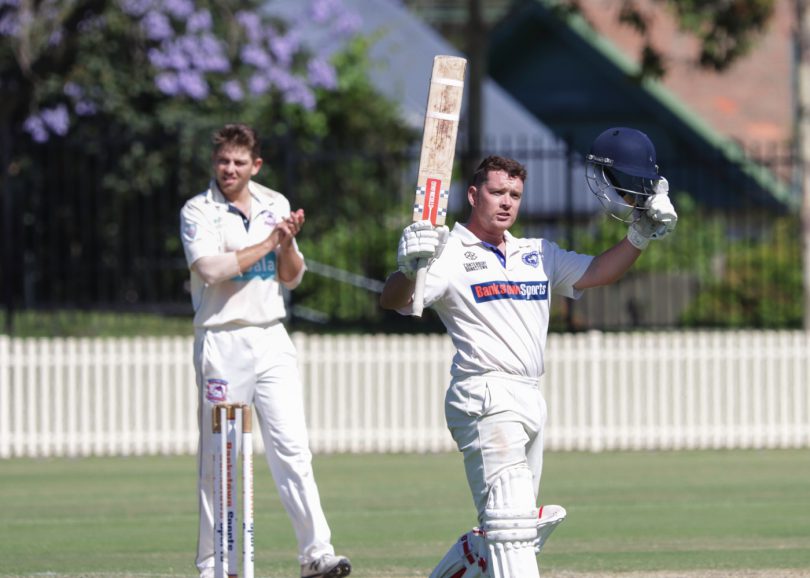 A RARE failure from run machine Nick Carruthers followed shortly after by the dismissal of Mitchell Hinds, had Bankstown in trouble at 2-16 against a strong Eastern Suburbs Dolphins in their first grade clash at Memorial Oval.
The Bankstown Sports Club Bulldogs won the toss and batted first on a wicket that appeared to be batsman friendly. But, alas they were in strife almost immediately.
The early dismissals of Carruthers and Hinds had the Dogs in trouble at 2-16.
Zeeshaan Ahmed, who is having a very good season, was next to fall for 21.
Skipper Nathan McAndrew and Jake Cormack came together and lifted the total to a more secure 111 before the inform McAndrew fell for a fighting 51.
The Sydney Thunder allrounder hammered 7 boundaries and a stunning six which got the Bulldogs innings barking. ‘
‘Macca’ is a vital cog in the Bulldog machine and is always full of enthusiasm. Ben Taylor joined prolific run getter Cormack at the crease and the pair lifted the total to a healthy 248 before the partnership was broken.
It was yet another top class knock from Jake as he dived on the Dolphins with 11 gloriously timed boundaries in his magnificent 101. His fine footwork meant he could dance down the pitch enabling him to drive the spinners forcefully to both sides of the wicket.
Cormack timed the ball superbly and played some delightful square cuts, but ironically a mis-timed cut shot brought about his undoing as he ‘nicked’ a short ball to the keeper.
Taylor took over the mantle of leading stroke maker and looked very much at ease with an outstanding 80. He played the old-fashioned late cut with great timing and pounded the Dolphins with forceful drives and leg glances. His three-hour vigil was an integral part of the innings and he is yet another top class Bulldog allrounder.
Liam Marshall chimed in with a very handy 25 not out, cutting the ball elegantly and playing some well-timed sweeps which guided the Bulldogs to a very competitive 9-329.