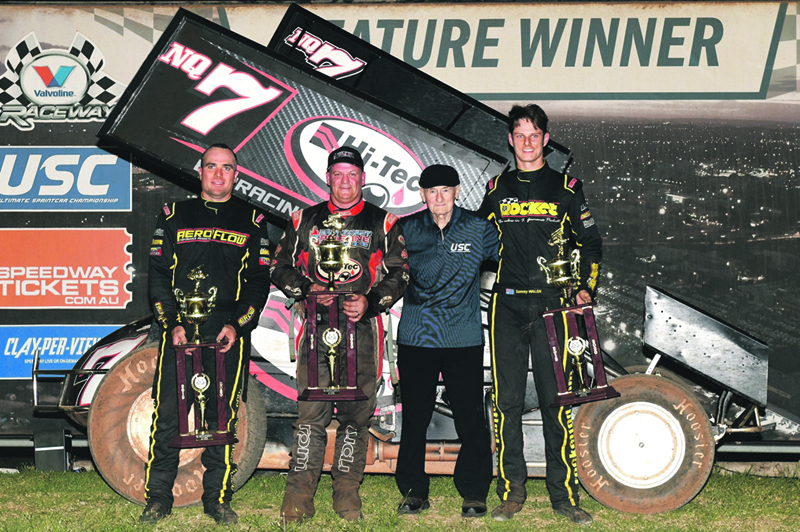 ROBBIE Farr is the back-to-back Sid Hopping Shootout winner for 2019/2020, almost 30 years to the day since his first ever podium result at Sydney’s Liverpool Raceway in 1989.

Farr was third on that night on November 3, 1989.
In front of a vocal and staunch crowd, the Ultimate Sprintcars, Speedcars and Wingless Sprints put on a show befitting the man who created the arena they raced on – Sid Hopping, the creator of the then Parramatta City Raceway.

For Farr it was his 129th trip to the podium in a stellar career that shows absolutely no signs of slowing down.
“This place means the world to me,” said Farr, “this one’s for Sid and all of the Hopping family for all that they have done to make this sport what it is. And to the current Waldron family too for all that they are doing. It’s an honour to win back to back Sid Hopping races.”

Kaidon Brown was simply brilliant scoring a clean sweep of his two heats and the CEJN Pty Ltd Speedcar A-Main but it was far from an easy road at any time for the talented teenager as he wrapped up his first VR feature win of the season.
The win is a great build up as he prepares for a dream drive in the Matt Wood Midget in the USA later this month.‚Ä®”There are some really good events, some really good competitors and I’m in a really good car, I can’t thank Mat Wood enough for this incredible opportunity,” Wood said.
In the stoppage plagued Wingless Sprints feature race, it was Mitch O’Brien who picked a spectacular time to score his first ever podium result.‚Ä®The 33-year old took the X-Presso Mobile Café/JME Excavations car to a very narrow victory and became yet another different winner in the Wingless season so far at VR.‚Ä®There has yet to be a repeat winner.