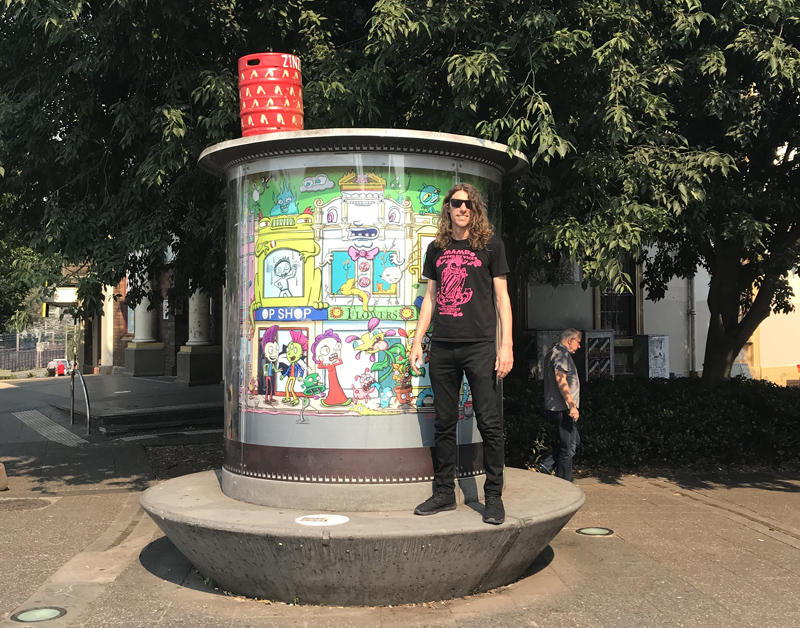 A NEW work by Craig Bunker, aka Bunkwaa, an Australian comic book artist and cartoonist, is now featuring at Inner West Council’s ArtSeat. Bunker has described his artwork as “a cartoon representation of the corner of King Street and Enmore Road, including all the buildings, shops and things of cultural significance to Newtown”

A NEWTOWN local who merges his love of Sydney history and satire in his comic book series, Spewtown, which parodies Inner West living, culture and people, is the next to feature at Inner West Council’s ArtSeat.
“I currently self publish a comic book called ‘Spewtown’, which sends up Newtown culture and history. The cartoon image I’ve made for the ArtSeat is a panorama of the area,” Bunkwaa said.
“People will be able to recognise familiar buildings and places.”
During the recent EDGE Newtown activations, Bunkwaa created a trail of giant illustrations called The Cars that Ate Spewtown which celebrated the stories and personalities of Newtown’s famous 1990s Reclaim the Streets activist movements.
“Exhibited across Newtown, my artwork [The Cars that Ate Spewtown] celebrated the stories and the personalities who led the loud and proud party protest movement Reclaim the Streets environment and activist movement,” he said.
“With a titular nod to 70s Australian cinema classic, The Cars That Ate Paris, a cartoon take on local lore, this is a bright documentation of a slice of Newtown’s colourful history and rich activist culture of the 1990s-2000s when we are once again grappling with how to share our public spaces.”