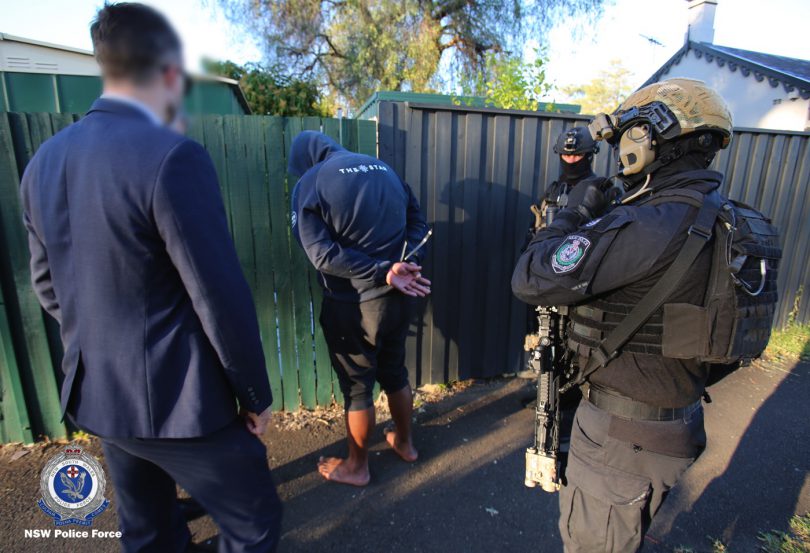 HEAVILY armed police surrounded a house in Granville last Friday and arrested a man allegedly involved in a plot to murder a man at North Sydney.

Commander of the Criminal Groups Squad, Grant Taylor, said it would be alleged by police that the 31-year-old was one of two men who were in Walker Street, North Sydney, last month for the sole purpose of shooting dead a man whom they believed was a rival in territorial disputes in south-west Sydney.
He said that man “can thank his lucky stars that he’s alive”.
Police allegedly attempted to stop the driver of a Mercedes on Walker Street at North Sydney on Saturday, August 14.
It’s alleged that after a short pursuit, the car was found abandoned in Cammeray where two men in dark-coloured clothing approached a nearby Toyota Camry and threatened the 76-year-old male driver with a firearm, before fleeing the area in his car.
The stolen Mercedes was seized for forensic examination and found to contain cloned number plates.
The man was charged with conspire and agree to murder any person, armed with intent commit indictable offence, drive conveyance taken without consent of owner, police pursuit – not stop – drive recklessly, in company rob while armed with dangerous weapon, and, drive motor vehicle during disqualification period.
Investigations under Strike Force Gillwinga are continuing.