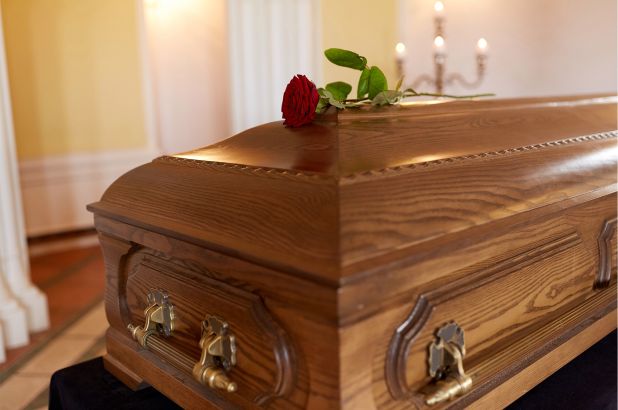 After family discovers body at funeral not their Dad

A REVESBY family is still reeling but has forgiven the funeral home responsible for placing the body of their husband and father in the wrong casket.
The discovery was made at the funeral of Angelos Nicolopoulos at St Euphemia Greek Orthodox Church in Bankstown on Friday, February 12.
Despina Nicolopoulos was farewelling her husband of 57 years when the mistake was discovered at the end of the service as the family went to pay their last respects beside the open coffin.
Her daughter was the first to realise the body in the coffin was not her father.
The widow and her family then found out her husband’s body had been buried two hours earlier.
The funeral home, Euro Funeral Services at Roselands, said the mixup occurred during a routine procedure.
Euro director Spiro Haralambous admitted it was not the first time this has happened as his staff had put the wrong body in the casket ahead of a private family viewing in 2008.
“The circumstances this time were very different,” he said.
Both families had used Euro Funeral Services but Mr Nicolopoulos’ body had been mistakenly buried at Rookwood Cemetery following a funeral service at All Saints Greek Orthodox Church in Belmore earlier on the Friday.
“The procedure is normally that one should check the ID on the body, before they actually put on the coffin lid, with the name plate on the coffin,” Funeral Director Spiro Haralambous said.
“This is where that procedure was not followed through and the wrong lids had been placed on their identical coffins.”
Both families were offered a refund over the ordeal.
“I have expressed my most sincerest apologies,” Mr Haralambous said.
Mr Nicolopoulos was farewelled at a second funeral on Monday.
Mr Haralambous said they would now have two people present who would cross check identification before the lid goes on.
“Then you cannot possibly go wrong,” he said.
Saying no other family should go through what they just did, son Bill Nicolopoulos says he hopes there will be an inquiry to reform funeral practices.
“But we have nothing but forgiveness in our hearts,” he said.