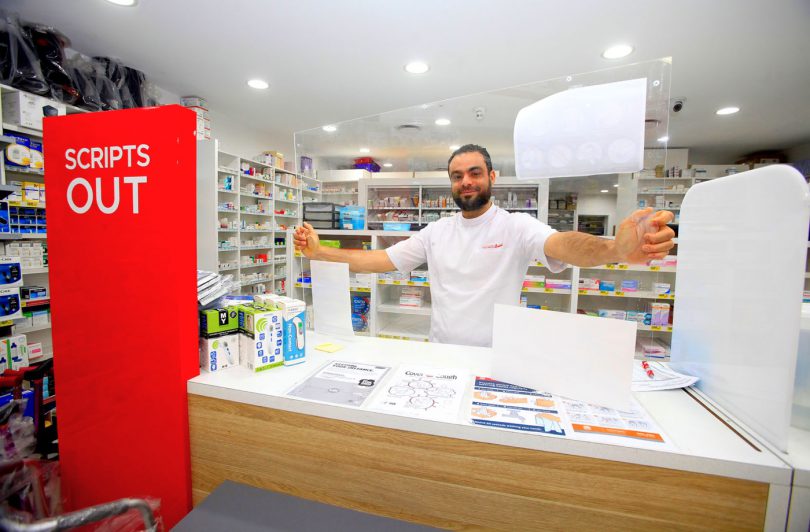 A MAN has been charged after an allegedly violent outburst in an Auburn pharmacy was caught on video last Monday night.

Pharmacist Ahmed Ouf was on duty at Pharmacy 4 Less at 11.30pm, when a customer allegedly slammed his hand into a perspex safety screen and smashed it toward him.
On Friday, police arrested a 40-year-old man at a home on Zillah Street in Merrylands and charged him with common assault and destroy or damage property.
Left badly shaken by the incident, Mr Ouf said the situation went from “zero to 100” in an instant.
“We were having a civil discussion,” he said.
“I didn’t see it coming.”
Also disappointed by the initial police response, Mr Ouf said his request for an escort while he closed the store went unanswered.
He said verbal abuse towards pharmacy staff was “much more common” since the pandemic began.
“The amount of abuse this year is more than I’ve copped in 10 years of working as a pharmacist,” he said.
Condemning the alleged behaviour, Auburn MP Lynda Voltz said the footage was “quite disturbing”.
“Frontline staff in our local pharmacies have provided a vital service to the community during this pandemic and it’s disappointing to see them being treated with disrespect,” she said.
Pharmacy Guild of Australia president, George Tambassis, labelled the behaviour as “unacceptable”, and Pharmacy4Less CEO, Feras Karem, also voiced his concerns, describing Mr Ouf as “a dedicated and experienced pharmacist”.
“Such incidents need to be dealt with by the authorities to send a clear message that it is not acceptable, but also to send a message to pharmacists and healthcare professionals that they will be supported by the authorities and provided the necessary protection,” he said.