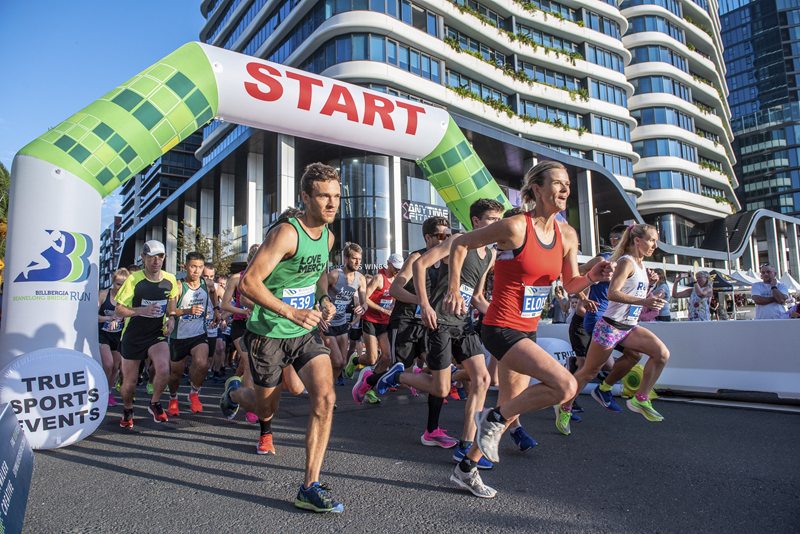 From Olympian to impaired balance athletes

ALMOST 2,000 people turned out for the fourth annual Billbergia Bennelong Bridge Run (BBBRun).
Race organiser, Glen Lebeau from True Sports Events, said it was the largest number of participants since the event began in 2017.
He said the turnout on Sunday, February 16, demonstrated Sydney-siders had embraced the event which had cemented its place on Sydney’s running calendar and also attracted serious athletes such as Australian Olympian Eloise Wellings.
“In addition to attracting serious runners, our real mission in staging the event is to see everyone have an opportunity to participate, whatever their level of fitness or ability,” he said.
“Each year we add additional races to broaden the events appeal and get people of all abilities involved.”
Starting at Marina Square in Wentworth Point, the 10km runners headed across the Bennelong Bridge to Rhodes, before looping back through Sydney Olympic Park and returning to Wentworth Point.
Picking up the trophy named in her honour, Wellings was the first woman across the 10km line in a course record time of 35:24, while Caleb Wegener crossed first for the men in 33:22.
Audrey Hall was the first woman across the line in the 2km family fun run in 7:21 while Luke Tadhg Costello won for the men in 6:41.
The male 2km race walk winner was Davor Zailac in 11:05 and the female winner was Santhiya Anandraj in 17:32; the 7km women’s wheelchair race was won by Amy Tobin and the men’s by Cormac Ryan in a course record time of 23:41; and a 500m RaceRunning event, specifically designed for people with impaired balance, was won by Annabelle Callender for the women and David Bates for the men.