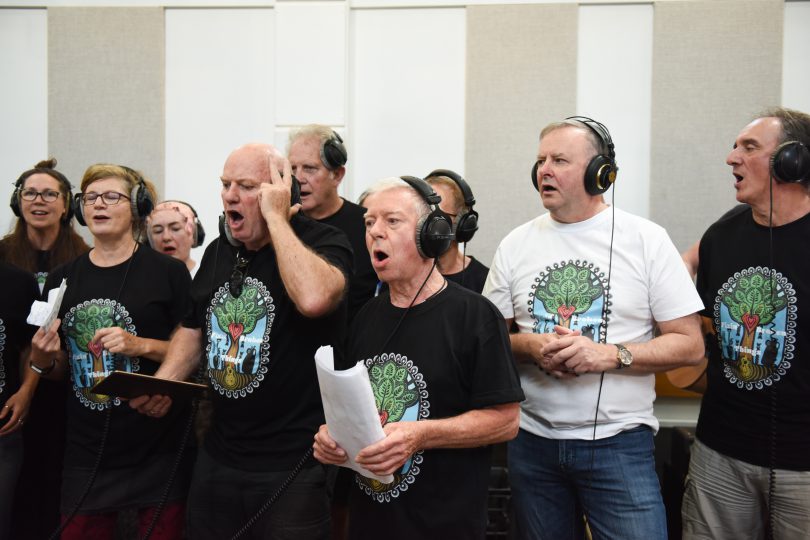 AGREEING it was time to prove that people have the power to change, Grayndler MP and Opposition Leader Anthony Albanese has faced the music, joining forces with Deniz Tek, Lizzie Mack and loved ex Red Wiggle Murray Cook to create a song, ‘Fixin’ Broken Things’

A bluesy, Stonesy number with a heap of heart and soul and featuring over 20 other voices, some celebrity, was recorded last week and will launch live with The Acaponies – The Gasolene Pony Peoples Choir this Sunday, November 10, at 4pm on the main stage at Newtown Festival.
Albo’s alibis, and songwiters of the tune, Lizzie and Murray agree that it is time to show that folks from an older generation can do something to show the kids how much they care about the environmental scenario that faces us all, deciding to channel their own frustration, beyond joining recent rallies, and write this tune for Albo.
The final track will drop in the new year through ABC Music and be available for download through all the usual platforms in early 2020.
In the meantime, folks can get on down to Reverse Garbage and grab one of the limited ‘Fixin’ Broken Things’ tees.
Some have been signed too so get down and grab one of the most unique Christmas gifts you will find around town this year.
Fans will also get the chance to sing-along with Murray, Lizzie and the ‘Movers’ at The Vanguard Newtown on Thursday, November 28, and again on New Year’s Day, January 1, at Kelly’s on King in Newtown.