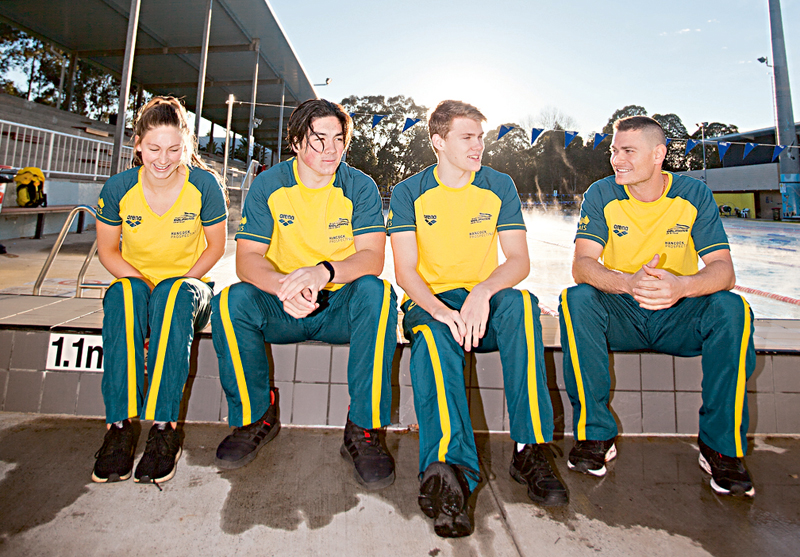 Swimmers Jenna Jones, Ricky Betar and Tim Hodge from the Auburn Swimming Club, along with their coach Clinton Camilleri, are heading to the UK next week to prepare for the World Para Swimming Championships.

THREE members of the Auburn Swimming Club are preparing to fly out to London next week to join the Australian Swim team competing at the World Para Swimming Championships from September 9 to 15.

Eighteen-year-olds Tim Hodge and Jenna Jones, along with 15-year-old Ricky Betar, will be joined by their coach Clinton Camilleri.
“Both Tim and Jenna are seasoned Australian team members with Ricky debuting for Australia at this competition,” he said.
The inaugural recipient of the inaugural Kurt Fearnley Scholarship, Betar took home four medals at the national champs earlier this year and broke an INAS world record for the 50m freestyle in the process.
A freestyle and backstroke specialist, Betar claimed silver in the 200m Freestyle Multi-Class and 100m Breaststroke Multi-Class, and bronze in the 200m Individual Medley and 50m Freestyle Multi-Class.
However it was his time of 1:02.03 in the 100m backstroke, which earned him a cap on the team.
Camilleri says current form suggests that all the Auburn representatives are on track to do a great job representing their country.
“The team will spend seven days in a Manchester staging camp before moving into the competition environment in London,” he said.
“It was interesting to note only two swimming clubs in Australia, placed three athletes on the team and the other one was a Swimming Australia high performance hub.”