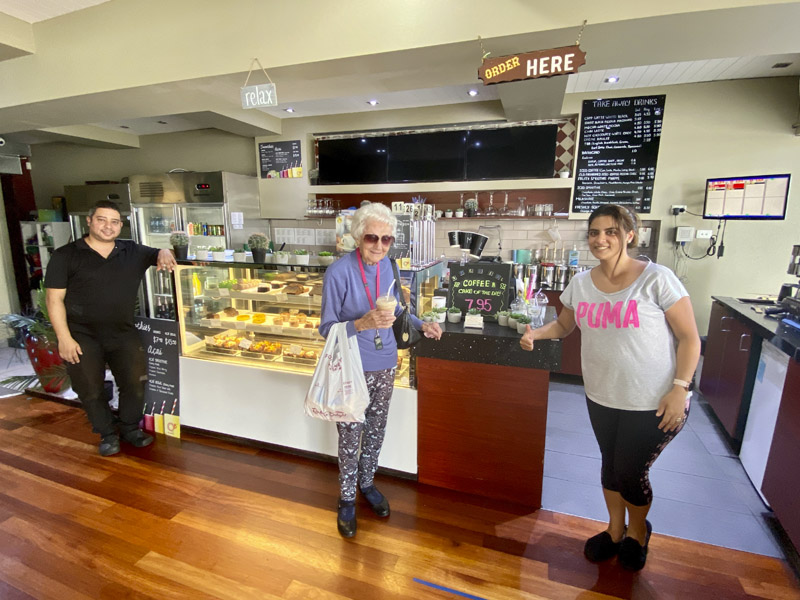 Saying her business gets more Uber Eats orders than from customers who walk in off the street, Condell Park’s OB Seafood cafe owner Tran Nguyen is still open six days a week, 9am-7pm.
“The last couple of weeks have been very flat but the good news for customers is that there is a lot of parking now on the street and in the shopping centre carpark,” she said.

Condell Park Deli owner Tina Scordino says it’s not easy keeping the business afloat and it is being made worse by landlords.
“There’s little compassion,” she said.
Open from Monday to Saturday from 8am, the Deli is still offering the full menu for takeaways and coffees as well as a freezer full of delicious homemade pasta sauces, soups, spaghetti bolognese and lasagne plus more to pick up for dinner later.

Cafe on Haig at Georges Hall is still enjoying a lot of local support.
Owner Amanda Filara says there is lots of parking thanks to the quiet streets and people are happy to pick up a takeaway snack or meal and have a break from cooking.
“The cafe is open Monday to Friday, from 6am and weekends from 7am,” she said.
Staff at Java Lava in Revesby report that business has dropped dramatically.
“We are still offering our menu, including coffees, on a takeaway basis,” manager Hany Botrous said.

Revesby’s Bon Appetit is brewing a lot of coffees but have no kitchen staff.
“However, we can still supply other menu items if customers ask,” says manager Tommy Taha, adding that they are open Monday to Friday from 6am and weekends from 7am.
Campsie’s Cafe Metrio is also still open seven days but is mostly just selling coffee to the regulars.
“Our kitchen is open in the morning so customers can still buy snacks, sandwiches and salads,” Erin Murray said.
Chinchilla Coffee House on Chapel Road, Bankstown, is open Monday to Friday from 7am and is mostly selling coffees as is Banksktown City Plaza’s Flying Zebra, with Camy Nguyen saying they also have a big variety of other drinks like juices and smoothies as well as snacks.
“We’re trying to survive but it’s tough as there are many less customers than before,” she said.
The Coffee Club at Bankstown Central, is offering a streamlined menu but is still doing a roaring coffee trade.
“Business has dropped off a lot though,” Lorraine added.