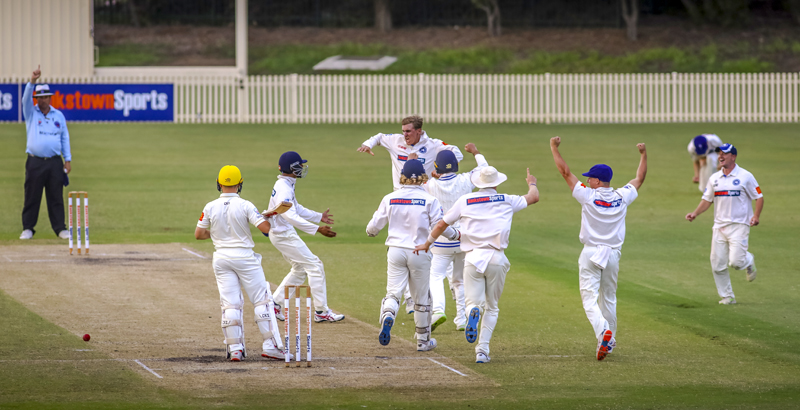 AFTER a magnificent day on Saturday, the Bankstown Sports Bulldogs won the coveted Sydney Smith Trophy for the NSW Premier Grade Cricket Club Championship with one round to play.

The club last held this title in 2003-2004.
Bankstown secured 10 outright points at Memorial Oval after Fairfield Lions were bundled out for a paltry 69 and 150. There was just one over left in the day when Ben Taylor trapped the last Lions batsman LBW, not offering a shot.
Earlier in the day, Fairfield’s run chase of 268 started disastrously. Express paceman Liam Marshall trapped both openers and the visitors were 2-12. They never recovered as Marshall cut a swathe through the whimpering Lions with 4-8 from seven devastating overs.
He was the catalyst for silencing their roar and received great support from Nathan McAndrew with 2-12. Allrounder Mitch Brown claimed 2-9, while Ben Taylor captured 2-14. Fairfield was asked to follow on and fared much better with 150. This time Brad Simpson took the first wicket but the visitors looked steady at 1-41.
Spinner Taylor was the destroyer with 5-52 as the Lions capitulated meekly. The ironic thing about the Fairfield batting was that the highest partnership in both innings, was for the last wicket.
In the first it was 35 which was useful as they were 9-34 and 54 in the second innings when they went perilously close to thwarting the Bulldogs. Wicketkeeper Cameron Middleton had a top-class day with five catches and his leg side snare off McAndrew, was a ripper.
In the last round next week, the Bulldogs take on Sutherland with a one-day match in Shark territory.