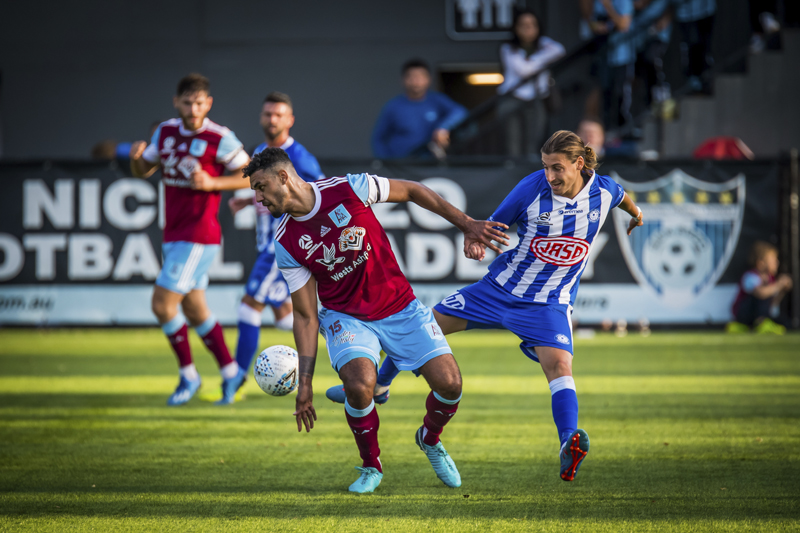 SYDNEY Olympic has suffered its second loss in as many matches – only beaten by a goal in the 87th minute.

Although disappointed his team didn’t come away with a win, coach Terry Palapanis said they weren’t great in the first 20 minutes “but after that I thought we totally dominated the match”.
He said Olympic were up against the Champions but still his side “totally outplayed them so it’s something that we can go into the next match with a bit of optimism”.
It was a game of two halves but Chris Payne’s finish only three minutes from full-time, proved the difference between the two rivals with Apia Leichhardt winning the Premier League match 2-1.
APIA took the lead in the 17th minute through a David D’Apuzzo header.
The goal came through a corner in what appeared to be a textbook play by the hosts. The corner kick landed at the head of in-form defender Josh Symons, who knocked it on to D’Apuzzo who headed it home.
The home side continued to threaten the visitors throughout the remainder of the first half, however they entered the half-time break with a one goal lead.
Olympic hit the pitch with vigour in the second half, coming close to an equaliser on several occasions before it finally eventuated through Bai Antoniou in the 60th minute in what was a well taken goal.
Adam Parkhouse cut in a perfectly placed ball to Antoniou, who fired his shot straight into the netting from close range.
The hosts were able to take the lead in the 87th minute and Olympic came close to a second equaliser in the final minutes, but veteran keeper Ivan Necevski proved his worth for APIA making a crucial save to keep the lead and finish the game 2-1.