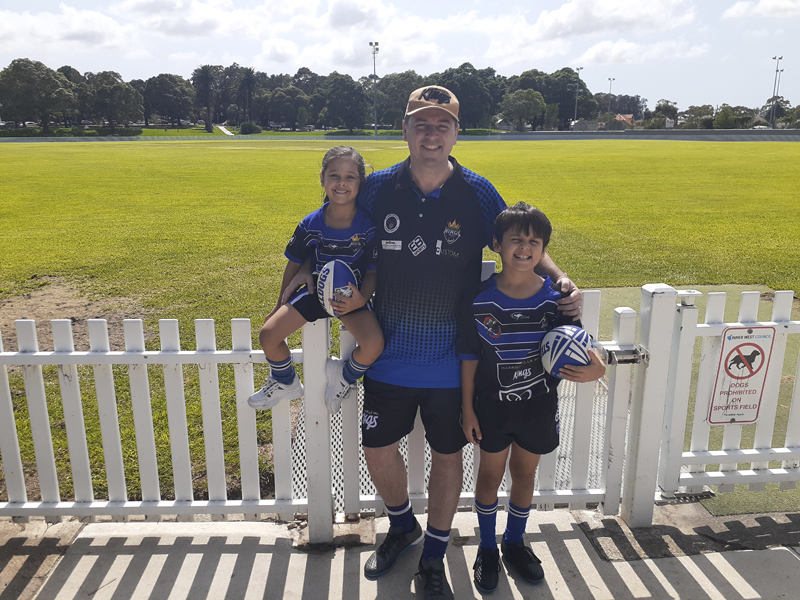 DECKING out their players like professionals, Marrickville Kings Rugby League Club’s Under 9s trainer Steve Greige says he and son Leon like to get about in their gear even if it’s not a training or game day.

“The clothing is all high quality and best of all, it’s free and the club spares no expense,” he said.
“This will be Leon’s fourth season and my daughter Savannah will be playing in her first season in the Under 6s.
“We started them with the Kings when they began school; we live in Canterbury so our closest club would be Earlwood who play in the St George competition but it was going to be very expensive and we heard how family-friendly the Kings were.
“They really look after the kids and Marrickville Oval, where we train, has a cool park so after training, they play in the park as a treat.
“The game locations are really nice too at Coogee Bay Oval or La Perouse, for example, so my wife Shirley and I often make a day of it; the kids play and then we’ll go across to the beach for lunch, it’s a nice little reward for them plus all the teams give out a medal to the best player each week which keeps them motivated.”
Steve says footy is great for kids.
“The sooner they play sport the better, especially when it’s rugby league, the greatest game of all,” he said.
“It’s good for their self-esteem, keeps them healthy and fit and flows into their education too.”
Training for the coming season is underway on Tuesdays and Thursdays from 5.30pm.
“Everyone is invited to come along, have a go, improve health and fitness and have a lot of fun,” Steve added.
For info, call Gerry, 0431 415 299 or mvillerslkings@outlook.com.