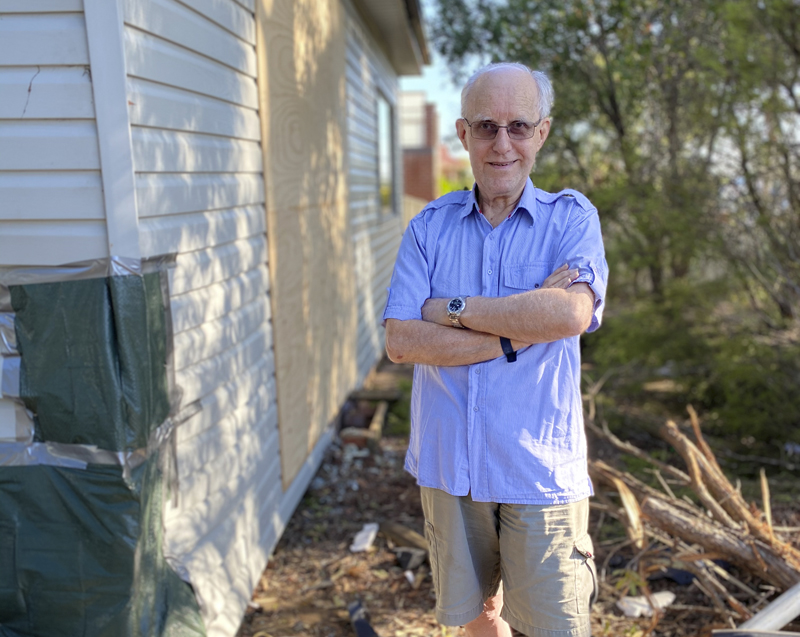 AN elderly couple had a lucky escape when their house sustained structural damage after being hit when two cars collided at Panania last week.
The crash happened when a Toyota Hilux and a Nissan X-Trail collided at the intersection of Topping Street and Marco and Panania Avenues about 8.20pm last Thursday.
The vehicles continued across the intersection with the utility striking the home of Alan and Lynne Ritchie on Panania Avenue.
The 17-year-old youth driving the utility was taken to Bankstown Hospital to be treated for injuries to his right leg. His passenger, also aged 17, was not injured.
A 46-year-old Padstow Heights man driving the SUV declined medical treatment.
Aged in their 70s, Mr and Mrs Ritchie were home at the time and were shaken but not physically injured.
Mr Ritchie said they were watching TV in a room at the back of the house when they heard a loud crash and then an almighty thud.
“Then the whole house started shaking,” he said.
“Structural engineers said the house has moved eight inches sideways and they’ve advised us against sleeping in the two front bedrooms, one of which was our room so we’ve moved into the third bedroom at the back of the house.”
Preparing to go into hospital yesterday for open heart surgery, Mr Ritchie said it was the last thing he needed at the moment.
“I didn’t need any worry about the house thrown into the mix when I’m dealing with the stress of the upcoming surgery,” he said.
“But we’re just rolling with the punches; we’ve still got the house, a working kitchen and bathroom and power, that’s a lot more than most at the moment.”
Living in the house for 45 years, Mr Ritchie said they were talking about downsizing, with their two sons now grown up, and this might just speed up that plan.
Investigations into the cause of the accident are continuing.