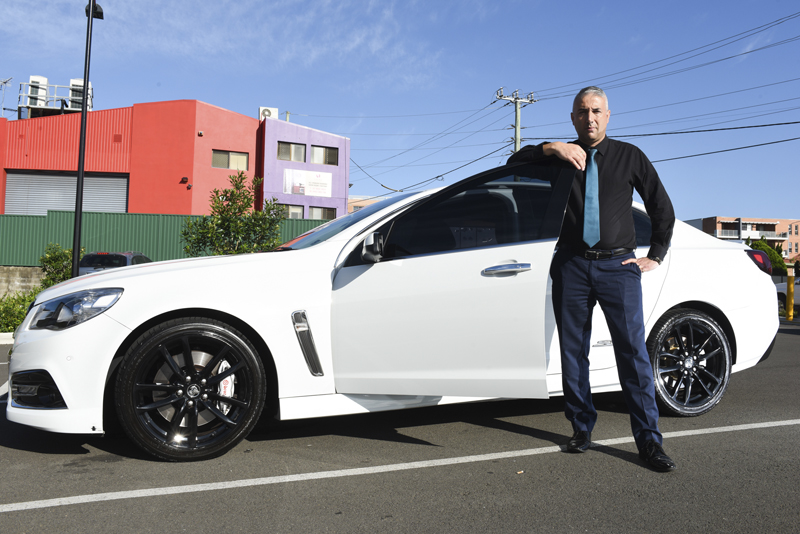 Major Steve Christou poses with his Holden SS, a car make that has been discontinued

AS the proud owner of a Holden SSV Redline V8, Cumberland Mayor Steve Christou says General Motors’ sudden decision to retire the iconic car brand by 2021, was “extremely disappointing”.
He said Holden had been a “powerful driver of the industrialisation and advancement of Australia”.
“I think the decision will be felt deeply by the many people who love the Holden brand and feel connected to the company which has been with us for 160 years and is almost ubiquitous in our lives,” he said.
“It’s a real shame that Holden could not prioritise the investment required to be successful in the long term in the right-hand drive market. Essentially the Holden footprint will no longer be in Australia”.
At last week’s council meeting, staff told councillors that only about 10 per cent of Cumberland Council’s fleet of 200 cars were Holdens.
Cr Christou acknowledged to the Review that his personal choice for a mayoral vehicle when he began his term as Mayor in September last year, was a four-cylinder Mercedes, which he said was chosen in accordance “with the appropriate guidelines”.
However he was adamant that his Holden gets a good workout when he isn’t performing his mayoral duties.
“The Holden does all our family stuff,” he said.
Finding unanimous support for his mayoral motion for Cumberland to note the impact GM’s decision will have on workers, Cr Christou said the sad reality was that the majority of Holden’s employees would lose their jobs by June.
“I feel very sorry for these employees who will soon be in a position where they need to look for work, potentially in other industries, due to this decision,” he said.