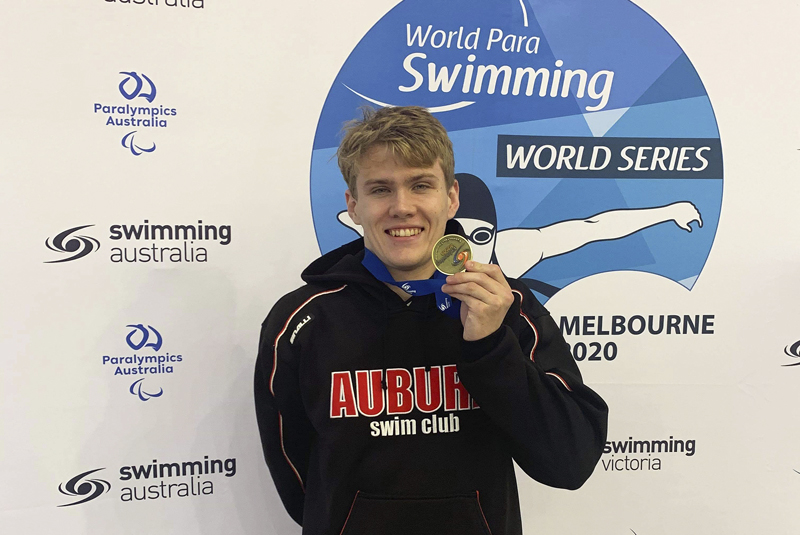 FIFTEEN swimmers from the Auburn Swim Club headed to Melbourne earlier this month to compete in the Victorian Open championships.

Auburn coach Clinton Camilleri said Paralympic athletes Jenna Jones, Tim Hodge and Ricky Betar also contested the World Para Series which was held in conjunction with the event and attracted about 70 swimmers from more than 16 countries.
“The event is part of Auburn’s Olympic/Paralympic campaign and all athletes are tracking well leading into trials which take place in June at the Adelaide Aquatic Centre,” he said.
Hodge (S9) improved on his Series performance from 2019, jumping from second place to the coveted top of the podium in the Men’s 100m Butterfly Multi-Class, clocking 1:01.77 and amassing 867 points.
In the Men’s 100m Backstroke Multi-Class, Hodge notched up his second gold medal, touching in 1:03.74 (886 points) to overcome tough competition in New Zealand’s Jesse Reynolds and his teammate Betar (S14) who snared bronze in 1:05.03 (757 points).
The 19-year-old also claimed the title in the 50m Backstroke, while Betar backed up to claim silver in the 50m Butterfly.
“It’s a really good feeling to come out here, do some good times, produce some good swims and even better to get a couple of gold medals,” Hodge said.
“It’s really important to get these things right heading into Tokyo.”