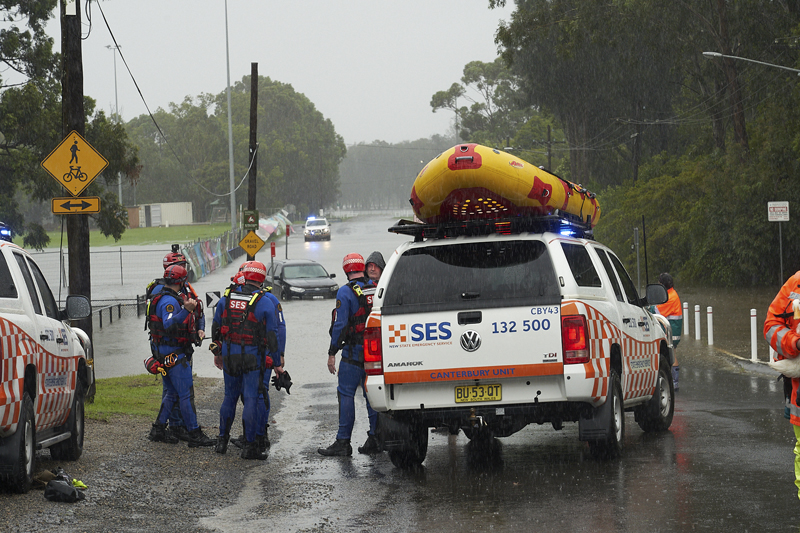 FLOOD rescue teams from the NSW State Emergency Service (SES) Canterbury and Marrickville Units were kept busy rescuing stranded motorists from the weekend’s wild, wet and windy weather.
Emergency evacuations were ordered for residents in dozens of low lying streets in both Marrickville and Tempe after the Bureau of Meteorology issued flood warnings for the Cooks River which reached minor flood level of 1.3m on Sunday morning with the high tide.
Marrickville SES media officer Hasmukh Chand said they had received 130 requests for assistance as a result of the weather, while Canterbury SES commander Lenore Nelson said that between Sunday and Monday, they received 262 calls for help.
“The jobs were mainly for leaking roofs and gutters, flooding caused by blocked drains and fallen trees and branches,” she said.
Mrs Nelson said that across the 42 units in the Metro Zone, SES volunteers carried out 150 rescues on Sunday night alone.
“A large majority of those were for people just driving into floodwater,” she said.
“In one case, our volunteers put witches hats up to block Moxon Road at Riverwood after the crew rescued one pair of drivers only to have to go back a short time later to rescue another stranded driver who had ignored the warnings.
“It’s very frustrating. Our guys were getting called out every few minutes for a flood rescue, and some of those were entirely preventable.”
Mr Chand also said many of the requests for assistance they attended to could have been prevented through simple property maintenance such as cleaning blocked gutters and trimming of overhanging branches.
He also urged all residents to prepare a home emergency kit and to consider their own evacuation plan.
“If you live in streets that flood frequently, then you should also look at preemptively moving vehicles to high ground and look for travel routes that avoid flooded streets,” he said.
“We really want to reinforce that the best time to prepare for floods and storms is now.”